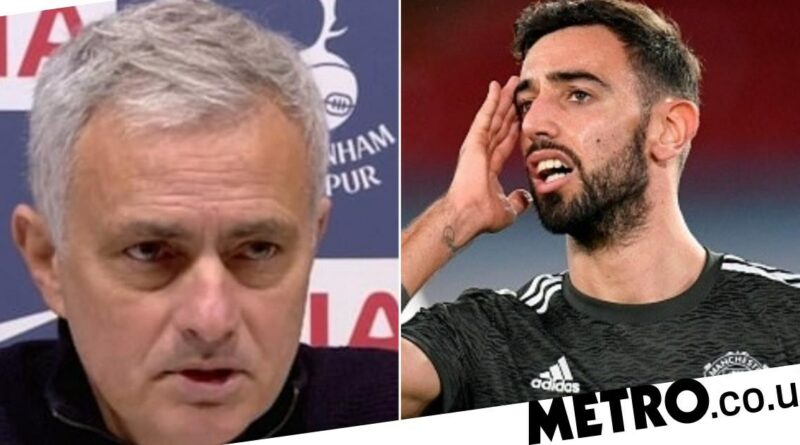 Fernandes took his tally to the season to 15 goals with with a spot kick in a 2-1 win against Dean Smith’s side on New Year’s Day.

Five of Fernandes’ 11 Premier League goals this term have come from the spot and only Leicester City have been awarded more penalties than Ole Gunnar Solskjaer’s side this term.

Mourinho’s side needed a penalty to open the scoring against Leeds United in a 3-0 win on Saturday but the Portuguese coach couldn’t help but aim a swipe at the amount of penalties that his former club have received this term.

‘I’m not speaking about Harry Kane by the way.’

Though Mourinho didn’t mention Fernandes’ name explicitly, the reference was quite clear given the previous comments he’s made about his former club.

Earlier this season following a 97th minute spot kick that was actually awarded after the full-time whistle against Brighton, Mourinho took another sly dig at the amount of penalties awarded to United.

‘What is important is the dimensions of the 18-yard box. He would never accept to play with a 17-yard box, I think he would prefer a 22-yard box. For him [Solskjaer], it would be better.’

Spurs beat United 6-1 in their early season trip to Old Trafford, when United’s only goal came from a Fernandes spot kick.

United have since leapfrogged Mourinho’s side and they’re now level on points with leaders Liverpool.

The Red Devils travel to north London in April for the reverse fixture.

Marco Silva hints he may leave out Alex Iwobi for Everton