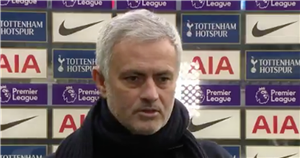 Tottenham manager Jose Mourinho has somewhat surprisingly named Aston Villa as his favourite side to watch this season.

Spurs ended a four-game winless streak in the Premier League with a 3-0 victory against Leeds on Saturday courtesy of goals from Harry Kane, Heung min-Son and Toby Alderweireld.

Jose Mourinho's side lie four points off the top of the table after coming through a tricky run of fixtures which saw them take on four of the so-called 'big six' in the latter end of 2020.

They next face cup games against Brentford and Marine before a trip to Villa on January 13.

And speaking to BT Sport at full-time Mourinho insisted he does not expect things to get any easier for his side – heaping praise upon Dean Smith and his Villa team.

"When people said after we played the top six easier games are coming of course I didn't believe it," Mourinho said.

"Leeds is a team capable of causing problems for everyone and the next one, Aston Villa, is my favourite team in the Premier League at the moment.

"It's the team that I most enjoy to watch, it's a team with lots of very good players who are very well coached and this is what is waiting for us."

Despite being mired in a relegation battle last season Villa are flying high in the current campaign, and find themselves seventh with a game in hand on all those above them.

Mourinho, meanwhile, appeared satisfied with Spurs' performance against Leeds – but believes they can still improve.

He added: "The three points are very important. I think we understood well how they could hurt us and how we could hurt them and in that aspect I am happy.

"I still think that we can and we have to do better."

Barrow secure return to the Football League after 48 years away