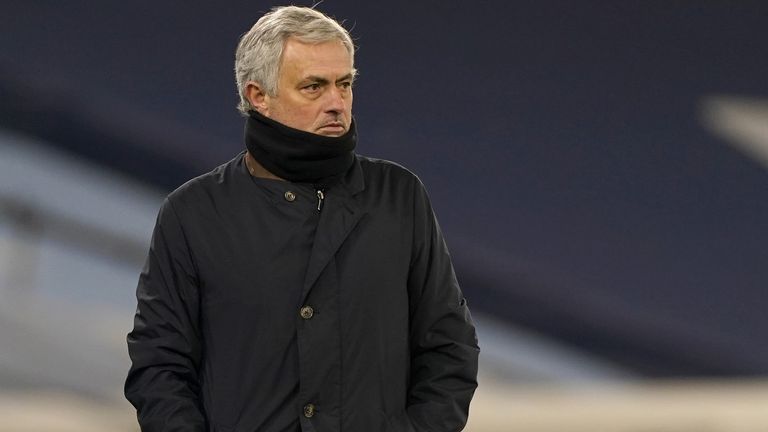 Tottenham have won just one of their last six games in all competitions after losing 3-0 at Man City on Saturday Night Football; Jose Mourinho on Gareth Bale and Dele Alli: “Good players, when they are fit, and when they are ready are always welcome, always”

Jamie Redknapp says Jose Mourinho is trying to please Tottenham fans with his tactics, and it’s resulting in Spurs looking a shadow of the side that topped the Premier League in December.

Mourinho’s side looked fatigued and lacking creativity as they were beaten 3-0 by Premier League leaders Manchester City on Saturday Night Football, meaning they have won just one of their last six in all competitions.

Spurs had led the division late in 2020, notably in November after a Mourinho masterclass saw off City 2-0 in north London, but Redknapp says Spurs look a different side now, and insists Mourinho is trying to make people happy with his tactics.

“Tottenham were outclassed in so many areas,” Redknapp told Sky Sports. “They were top on December 15 and now they’re 14 points behind Man City. When I look at the team that was top, a lot of people were talking about them being able to win the league, they’re loving the way they’re playing, a Jose masterclass, defensively sound and breathtaking on the break.

“But when I see this Spurs side right now, it’s a shadow of that team. No pace going forward, Son is doing more defending than attacking and the way they’re playing right now, that almost feels like a Jose masterclass and they are really struggling.

“It almost feels like Jose is trying to make other people happy with the way he’s playing. When they were playing well at that stage, they were playing Moussa Sissoko and Pierre-Emile Hojbjerg and it wasn’t a joy to watch, but it was winning for them.

“Now it’s like he’s almost trying to please the fans and it’s not working. Rotating the back four all the time – when does that bring anyone any confidence? Then he said they’d made mistakes – yes, because you keep changing the back four every week. That’s what it feels like to me.

“It’s a team that is lacking confidence, but he has to accept responsibility for that. He brings in Dele Alli and Gareth Bale and he wants them to bail him out, if you like. He’s been treating them badly, they’ve not been in the team and now you’re asking them to make a difference for you? That’s not how modern football works.

“You need to keep players onside and Jose is making a habit right now of upsetting too many people that he needs as allies, not enemies.”

Jose: Coaches not crazy… if you are ready, welcome Alli played his first Premier League minutes since December on Saturday, and Bale was back in the squad after being left out of the 5-4 FA Cup defeat by Everton, but Mourinho again seemed to send out a statement to both players, who would have expected more playing time this season.

“We coaches sometimes can make the wrong decisions, we all do, but not one of us are crazy. Not one of us says: ‘I don’t want this player to help me and help the team’ when that player has the potential and conditions to do it.

“Do they have the qualities? Yes we know they have. If they are fit, and if they are ready, and if they consider themselves physically and mentally ready, welcome. Because the team needs everyone. If we can have Dele and Gareth fit and ready to play, it is a big improvement in our squad.”

Mourinho was happy with his players’ effort, and sympathised with their schedule after playing 120 minutes at Goodison Park on Wednesday.

“[It was] a fresh team against a very tired team, but the team that started the game very, very well. We hit the post, 1-0 could give us that fuel that you need when you are tired like the boys were, and then one more of these modern penalties, I call them modern penalties, to put us in a difficult situation.

“But I’m very, very happy with the players’ attitude. I have guys on the pitch that played two hours a couple of days ago, they gave everything, of course we have guys in difficulty. Brave attitude, great dignity, of course losing 3-0, a team that is not united, not together, would give up and be punished. But I saw guys like Harry, like Pierre, like Ben, just a few names but there are five, six, seven.

“They give everything, so I have nothing to say against my players, not even a couple of defensive mistakes that are always present, but I cannot complain with the attitude of the boys.”

Pep: We continue our good rhythm

Pep Guardiola, whose side have now won 11 straight games in the Premier League and look strong favourites to win a third title in four years, says City are on a roll.

“We beat an exceptional team. They hit the post, in a situation which can change the game, and the last action from Gareth Bale, but they didn’t [create] anything else, so that is so good in terms of defensive commitment.

“And in terms of the way we were playing with the ball was really good, especially in the second half. Another victory, important against a good team, and we continue our good rhythm.”

On Rodri’s penalty and whether he’s City’s new penalty taker: “No! The taker was not good. We were lucky! I love and admire the courage to take it but it was not a good taker, we were lucky!”

City now go to Everton in the Premier League on Wednesday night at 8.15pm, before going to Arsenal on Super Sunday, live on Sky Sports Premier League at 4.30pm.

Tottenham are now at Wolfsberger in the Europa League round of 32 first leg on Thursday at 5.55pm, before going to West Ham, also on Super Sunday, live on Sky Sports Premier League at midday.