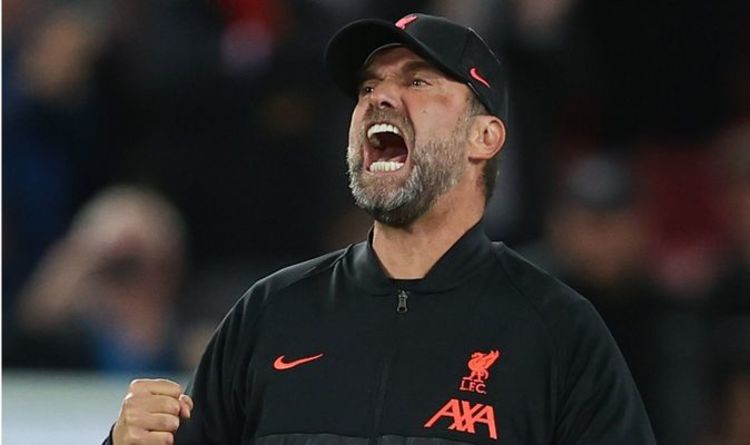 Jurgen Klopp has revealed that he refused to show anger towards his Liverpool players at half-time of last night’s 3-2 win over AC Milan, despite his side conceding two goals in a matter of minutes to throw away the lead before the interval. The Liverpool of old were back in the opening stages of the game as the relentless Reds started like a house on fire in a bid to blow the Italians away.

Trent Alexander-Arnold helped open the scoring when his low ball across the box was turned in by Fikayo Tomori.

Mohamed Salah then squandered the chance to double the lead as his penalty was saved by goalkeeper Mike Maignan.

Liverpool were soon made to pay though as a quick-fire double from Ante Rebic and Brahim Diaz saw Milan go in ahead at the break.

Yet rather than blow a gasket, Klopp kept a cool head when addressing his players in the dressing room, instead showing them exactly what was required to win the game.

“I wasn’t angry [at half time],” Klopp said after the triumph.

“We saw it coming and tried to get the message across but it didn’t work out because of the outstanding atmosphere in the stadium.

“We started complicating it. We showed the boys some things at half-time and we organised things.”

Liverpool were quick to respond as Salah made amends for his miss from 12-yards, netting the equaliser on 48 minutes.

Captain Jordan Henderson then struck what proved to be the winner with goal of the night, driving home a loose ball from outside the area.

The result could prove to be crucial for the Reds come the end of the group stages, particularly after Atletico Madrid and Porto played out a draw at the Wanda Metropolitano.

During a separate interview with Liverpool’s official website, Klopp went into further detail on his half-time team talk and claimed he struggled to get the message on board before the break due to the atmosphere inside Anfield.

“No, I wasn’t angry at all, not at all. We saw it coming, actually; we saw the last five minutes coming in the last 15,” he said.

“We tried to get the message across, it didn’t work out because of the outstanding atmosphere in the stadium.

“Football-wise, we lost the ball in the wrong moment, it was absolutely not necessary. We played so flexible with the triangles on the wings, it was really, really good, but then we started getting a bit complicated and that was one mistake. The other mistake was the last line was slightly too deep.

“I was actually waiting for half-time and I was really happy when the whistle came and we could solve that. We sorted it and then we didn’t have that problem anymore. I was not angry at all, that’s the job to do.

“I cannot celebrate 30 minutes and then for 15 minutes I’m angry or whatever. It’s just to make sure we have a chance to win the second half – that’s what we did and all fine.”