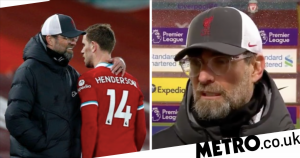 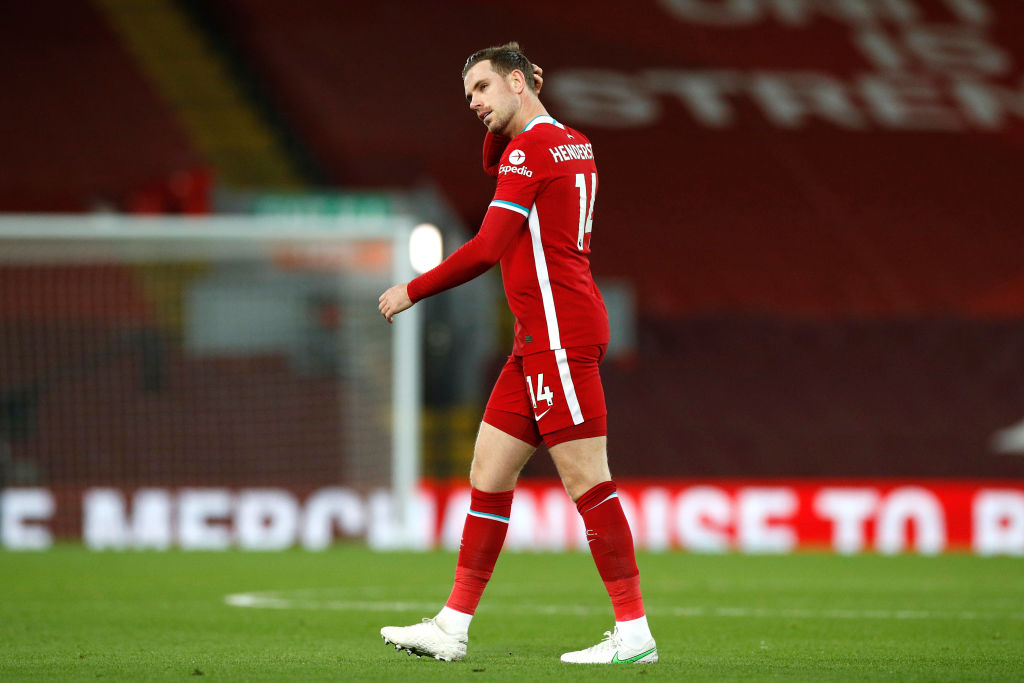 A downbeat Jurgen Klopp suggested Jordan Henderson’s groin problem may be serious as Liverpool’s injury crisis worsened in the side’s 2-0 defeat to Everton.

Gylfi Sigurdsson converted a controversial late penalty after Richarlison’s earlier strike in only the third minute to ensure Everton ended their miserable 22-year wait for a win over their bitter rivals at Anfield.

The result meant Liverpool have now lost four consecutive home league games for the first time since 1923 and the champions’ misery was compounded by Henderson being forced off on the half-hour mark.

After sprinting past Toffees midfielder Abdoulaye Doucoure midway through the first half, the Liverpool captain pulled up and fell to floor clutching his right leg.

And while the England midfielder attempted to play on, he lasted just a few more minutes before having to be replaced by Nat Phillips.

The Reds have already lost Virgil van Dijk, Joe Gomez, Fabinho and Joel Matip this season and a despondent Klopp bemoaned Henderson’s injury as he analysed his side’s performance.

‘If you watch the game it may be a little bit a story of these games: being dominant, being in charge of the game, don’t finish it off,’ the Liverpool head coach told beIN SPORTS.

‘They had a header which Alisson saved well. But when you think about the quality of the opponent, we controlled that pretty well as well.

‘We make one mistake, they score. They make ten mistakes, we don’t score and that’s the situation at the moment. We have to change that.

‘The good things we did today, I actually don’t like to mention it now, but that’s of course the sign that we can change it and that’s what we will do. We will just keep going.

‘It’s a tough one to take and it doesn’t look like it’s only a little one unfortunately as well but we will go through this and in the end we will succeed.’

The German later told Sky Sports: ‘[It was in the] groin adductor region, so that’s not good.

‘But we don’t know exactly. The rest we will know tomorrow.’

Miguel Delaney: 'For anyone in Rice's position, nationality isn't that easy'

Aguero targets silverware over individual acclaim with City this term