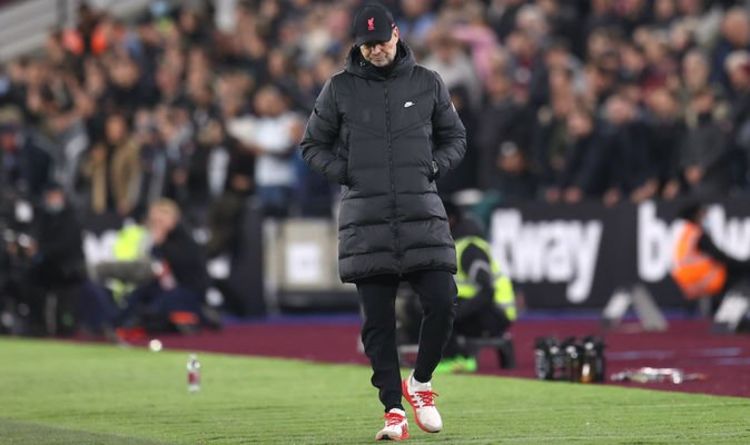 Jurgen Klopp’s three biggest fears West Ham fears were proved right on Sunday as Liverpool were beaten 3-2 by David Moyes’ side at the London Stadium. Under Moyes, West Ham have developed into a team which relies so heavily on counter-pressing, a trait which has been mastered by Klopp over the years.

The West Ham boss has transformed the Hammers from battling relegation to a side capable of challenging the very best for a place in the Champions League.

And Klopp saw those fears come to fruition as he nervously watched West Ham play his side at their own game.

Speaking ahead of the contest, Klopp said West Ham’s three biggest strengths was their ability to counter-press effectively, their high energy in possession as well as the attacking threat they pose going forward.

All three of those were on display once more at the London Stadium as West Ham played free-flowing football, and with confidence. Something which hasn’t been seen at the club in many a year.

The Hammers attacking threat is quite like nothing they’ve seen in the past decade.

Michail Antonio has already scored six goals and provided three assists in the league this season, while the likes of Jarrod Bowen, Said Benrahma and Pablo Fornals have also provided their fair share.

“But off the right of them should be a bit of space, but no obviously it’s not that easy,” Klopp said pre-match.

“It’s not only about Rice and Soucek unfortunately when you talk about West Ham. West Ham’s biggest jump they’ve made is from an intensity point of view, they’ve become a high intensity, they play counter-press, they’re high energetic in possession not too complicated but high energy.

“They have technically sensationally skilled players in offensive areas. I think all three behind Antonio – Antonio is really good as well – have all what you need which what makes it so tricky.

“On top of that, counter attacking is still there, set pieces still there so it is not a coincidence where they are.

Two players who have been crucial to West Ham’s turnaround have been Declan Rice and Tomas Soucek, both of which posed a threat to Liverpool all-game long. And neither would have looked out of place in a Liverpool shirt on the day.

It’s no surprise that Rice continues to be linked with the Premier League’s biggest clubs, and it seems inevitable he will move on at some point in the near future.

Soucek meanwhile, has garnered his own plaudits after his impressive impact in the Premier League, following his move from Czech side Slavia Prague in January 2020.

West Ham will take huge confidence away from a game in which they matched the Reds, before providing the killer blow when presented with the opportunity.

After all, Klopp’s side will either be there, or thereabouts, come the season’s end alongside both Chelsea and Manchester City – who will push them all the way.

On another day Liverpool might have won it themselves, but the Hammers proved to be the more clinical of the two.
As for Liverpool, dropping points against a well-organised West Ham is by no means a failure, but all those points add up in a title race.

But if Liverpool are to do what many tip them to do this season: be crowned champions, then Klopp will have to deal with plenty more fears between now and the end of the campaign.

The Hammers took the lead in peculiar circumstances when a fifth minute corner was turned into his own net by Alisson Becker.

Liverpool equalised shortly before half-time when Trent Alexander-Arnold’s free-kick left Lukasz Fabianski as a spectator as he watched it loop into the top corner of his goal.

Then in the 68th minute Fornals was played through on goal, before the Spaniard cooly slotted past Alisson to send the London Stadium into raptures.

Kurt Zouma added a third for West Ham from a corner, until Divock Origi gave Liverpool a brief moment of hope with his 84th minute strike.

The result means West Ham leapfrog Liverpool in the table, while Klopp’s side drop to fourth heading into the international break.

Next up for Liverpool is Mikel Arteta’s Arsenal at Anfield in the Premier League after the international break.