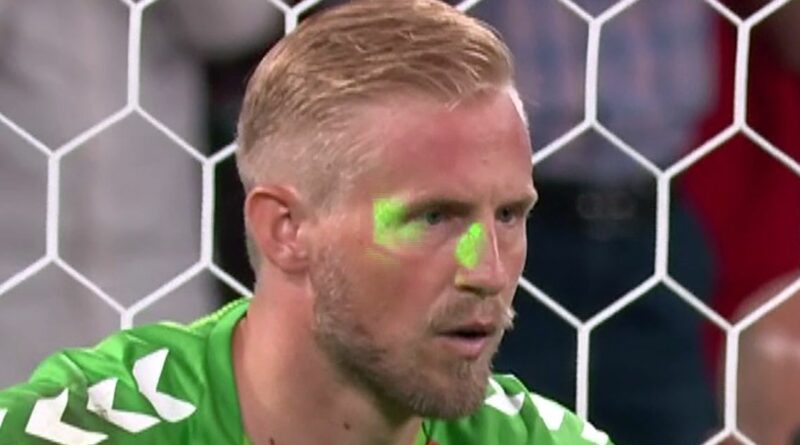 Denmark goalkeeper Kasper Schmeichel has explained how he complained to referee Danny Makkalie about lasers being shone in his eyes during their Euro 2020 semi-final clash with England.

As the Leicester City number one prepared to try and save Harry Kane's extra-time spot-kick, cameras spotted lasers being shone in the eyes of Schmeichel.

Surprisingly, the 'keeper still managed to save Kane's effort, though he was unfortunate in that England's captain responded fastest and converted the rebound – the goal enough to eliminate the Danes from the tournament entirely.

The Premier League & FA Cup winner has since revealed: "I did not experience it on the penalty kick because it was behind me on my right side. But I did experience it in the second half.

"I told the referee. And he went to say something to one of the other officials."

UEFA confirmed that England will face punishment for the incident given the trouble stemmed from a member of the crowd at Wembley Stadium.

They will also face punishment for causing a 'disturbance' after some sections of the crowd jeered Denmark's national anthem as well as setting off fireworks.

The European football governing body's statement read: "The case will be dealt with by the UEFA Control, Ethics and Disciplinary Body (CEDB) in due course."

Despite a former Home Office minister claiming that she understood that police were looking into the incident after describing the behaviour as 'appalling', the Metropolitan Police have since confirmed that the matter is being dealt with by UEFA and is not a police concern.

Speaking in the House of Lords, Baroness Williams of Trafford told peers: "Lord Thomas of Gresford mentioned about the incident with the laser pen.

"It was an appalling incident and I have already asked about this. I understand the police are investigating it."

Kane's goal proved to be the winner as England held on for the final 20 minutes of extra-time to reach their first major tournament final in 55 years.

Gareth Southgate's side will meet Roberto Mancini's Italy, who last reached the final of a European Championship as recently as 2012, where they were defeated by Spain in rampant fashion, La Roja running out 4-0 victors.