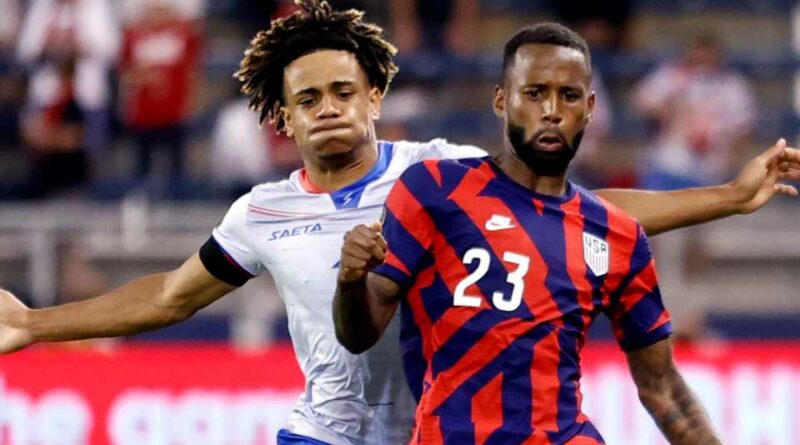 The most important aspect of Kellyn Acosta’s performance for the United States men’s national team in a Gold Cup-opening victory over Haiti was that it happened at all.

Wearing the U.S. Soccer crest has been part of Acosta’s routine lately, but not recently. His appearances in the CONCACAF Nations League competition last month and this tournament represent his first sustained involvement in the USMNT in three years.

In a game Sunday that featured little about which those inside the team could be excited — aside from the 8th-minute goal by left back Sam Vines, Shaq Moore’s speed along the right sideline, composure in defense from young Miles Robinson and the three points that resulted – Acosta’s energy and audacity stood out the entire 90 minutes.

“I missed the urgency to score more goals, to be dangerous … and aggressive,” head coach Greg Berhalter told reporters following the game. “To me, it was way too slow, way too backwards and not enough intent to turn Haiti around and get them defending in the penalty box.

“So from the attacking end, we were disappointed with the intent that we showed tonight.”

Acosta was among the few largely blameless in all of this. He was involved in the game’s only goal and covered the Earth like Sherwin Williams.

Twenty minutes in, he put his consciousness at risk by aggressively pursuing a loose ball with the top of his head. Before halftime, he shut down a strong Haiti advance by surging toward the sideline and knocking the ball toward the crowd. Before the break, he played a great forward ball to sub winger Nicholas Gioacchini that resulted in a corner kick.

It was the same in the second half: A timely retreat in the 49th minute to disrupt a Haiti pass in the U.S. box that might have developed into a goal; a lovely pass off the outside of his boot that Gioacchini nearly turned into a second goal but instead knocked off the far post; and, though it was punished with a yellow card, an aggressive open-field “tackle” executed just to be certain Haiti didn’t get into the clear in the 70th minute.

Moore was named U.S. Soccer’s Man of the Match because he dazzled. The U.S. won, though, because Acosta was most active and effective in making Vines’ goal stand up. On Twitter, soccer journalists Brian Sciaretta of American Soccer Now and Ives Galarcep of Soccer By Ives cited him as one of the best USMNT players on the night.

If this endures through the course of the tournament, which continues Thursday with a second group game, against Martinique, and concludes with the championship game Aug. 1, Acosta will have earned a position for the far-more-important World Cup qualifying games that start flowing in September and do not abate until March.

Acosta did not start as a defensive midfielder in this game; that role belonged to San Jose’s Jackson Yuell. But Acosta probably did better work in that regard.

He’d already performed well in multiple roles in the Nations League final against Mexico, even moving to left back late in the game to help solidify the defense in that part of the field. This was just one more step in a comeback that probably should never have needed to be a comeback.

Originally from the Dallas suburb of Plano, Acosta earned 23 caps before his 22nd birthday, including four starts in the team’s 2017 Gold Cup triumph and 90 minutes of the 1-1 draw in World Cup qualifying at Mexico’s Estadio Azteca. He played only the final 18 minutes of the disastrous World Cup qualifying loss to Trinidad & Tobago that kept the U.S. out of Russia 2018, but he nearly rescued the effort with a pass that teammate Clint Dempsey fired off the goalpost.

He played in six friendlies and started four in 2018, when Dave Sarachan was coaching the team on an interim basis, but as the program and its fans became enthralled with new midfield options including Weston McKennie and Tyler Adams, Acosta disappeared from the scene. He made 30 starts for the Colorado Rapids in 2019, but not a single appearance for the USA.

Four years ago, when Acosta was 21 and selected to the MLS All-Star Game as a member of FC Dallas, his future appeared to be blazing. He played 45 minutes of that 1-1 draw against Real Madrid at Soldier Field in Chicago. There was such open discussion of a potential move to Europe that even Dallas’ technical director openly said he expected that to happen for Acosta.

Instead, a year later, he was traded to the Colorado Rapids, which was as close to the bottom of MLS as one could get. As he battled a nagging groin injury, Acosta gradually disappeared from the U.S. soccer radar. He still is only 25, though, hoping for a move to Europe that could reinvigorate his career and a role with the USMNT that could help send everyone involved to Qatar in November 2022.