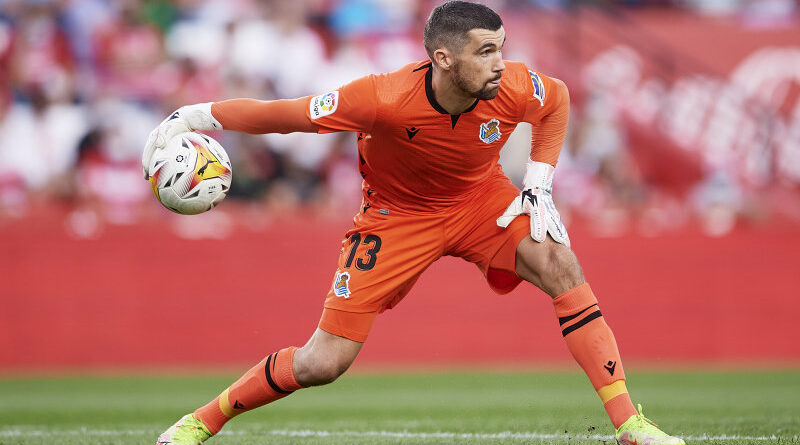 Australia will not only go into the must-win World Cup qualifier against Vietnam on Thursday night without suspended playmaker Ajdin Hrustic, but face a rushed preparation due to the late arrival of key players.

First-choice goalkeeper and captain Maty Ryan, of Spanish club Real Sociedad, and left back Aziz Behich, from Turkish side Giresunspor, are regular fixtures in Graham Arnold’s eleven. Both will only get one training session with the team before the game at AAMI Park. 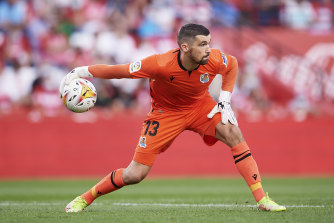 Mathew Ryan will get one training session in before the clash.Credit:Getty Images

They are two of five players who had yet to land in Victoria on Tuesday afternoon after weekend fixtures and travel schedules ensured their late arrival.

The others are Greek-based defensive midfielder James Jeggo, Dynamo Dresden forward Brandon Borrello and back-up goalkeeper Danny Vukovic, who is with NEC Nijmegen in the Netherlands.

Of that trio Jeggo has the most recent starting experience with the national team, having been in the line-up for the draws at home to Saudi Arabia and away to China. Failure to win at least one of those games has put Australia in a more difficult position than they might have expected as they are now third on the Asian group-B table, behind the Saudis (16 points) and Japan (12). Australia have 11 points and all have played six games. 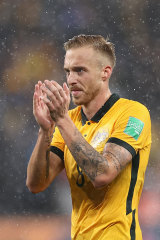 He also came off the bench for the unlucky 2-1 loss to Japan last October, when Behich’s late own goal gave the Blue Samurai all three points.

However, all save for Borrello have extensive experience of playing for Arnold and his assistant Rene Muelensteen, so should be able to slot in even if their preparation time is minimal.

Hrustic, who picked up bookings in both matches against China earlier in the group phase, has to sit out the Vietnam game through suspension. He will fly from Germany (where he plays for Eintracht Frankfurt in the Bundesliga) and join up with the squad in Muscat for next week’s equally critical game against Oman.

Sydney’s Stadium Australia will host the all-important World Cup Qualifier between the Socceroos and Japan on March 24 – a game which could determine which nation gains automatic entry to Qatar 2022.

Australia have secured qualification for several World Cups in Sydney – most notably the iconic penalty shoot out triumph over Uruguay in November 2005 – and also won the Asian Cup at the ground in January 2015.

James Johnson, Football Australia’s chief executive, said the match will be the most important game played in this country since the Socceroos clinched qualification for Russia 2018 by beating Honduras at Stadium Australia in late 2017, which was Ange Postecoglou’s last game in charge of the national team.

“We have no doubt the entire nation will unite behind the Socceroos, so giving two months’ notice enhances the opportunity for fans to plan a pilgrimage to Stadium Australia in Sydney for what will be the most important Socceroos match played in Australia since Honduras in 2017,” Johnson said.

“Stadium Australia has hosted many famous Socceroos nights in the past, including Uruguay in 2005, Iraq in 2013, and the AFC Asian Cup Final against Korea Republic in 2015, and we will leave no stone unturned to ensure that the match against Japan in March 2022 goes down as another historic and memorable night at the venue.

“We recognise and thank the NSW Government for partnering with us on this showcase match which will attract significant visitation to the state, and promote Sydney to a massive broadcast audience of millions of football fans in Australia and Japan, across Asia, and around the world.”

The right back or central defender was a free agent after playing for Red Star Belgrade and has inked a one-year deal with Columbus Crew, with options for 2024 and 2025.

“Milos is a centre back who brings championship experience and leadership to our squad,” Columbus president and general manager Tim Bezbatchenko said in a release.

“In addition to winning domestic and continental titles at the club level, Milos has earned valuable experience with the Australian national team, including the 2018 World Cup. We believe his attributes will serve him well in our league and look forward to seeing him make an impact in our team.”

EFL confirms 17 positive coronavirus tests after latest round of testing