‘It means so much to all of us’: Tearful James Milner gets a hug from Jurgen Klopp as Liverpool players are overcome with emotion after sealing second successive Champions League final appearance after Barcelona win

Liverpool’s players were reduced to tears after pulling off what many thought was impossible, coming back from 3-0 down in the tie against Barcelona to reach the Champions League final.

The Reds harnessed the emotionally-charged atmosphere inside a packed Anfield and simply overwhelmed Lionel Messi and Co as braces from Divock Origi and Georginio Wijnaldum sealed a second successive Champions League final.

Jurgen Klopp was a bundle of energy at the end as his players struggled to keep back the tears and the German soon showed his man-management skills as he raced to comfort each of them individually. 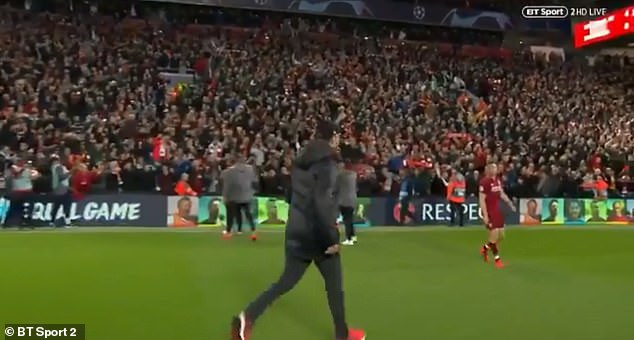 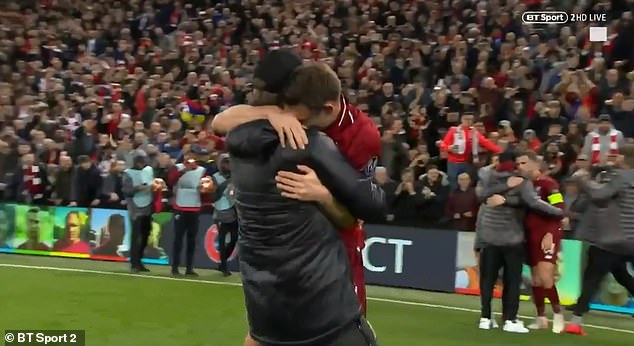 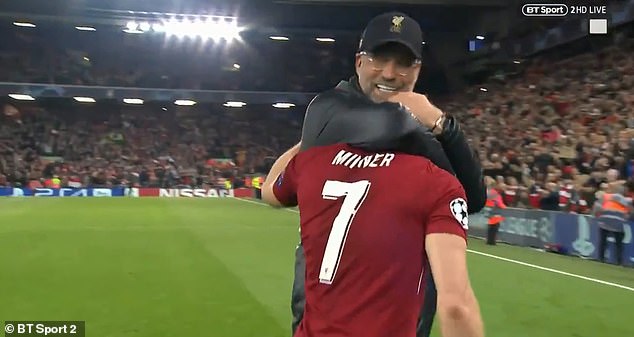 James Milner is in tears, Klopp runs over and gives him a hug!

James Milner, an experienced player in Liverpool’s ranks, was in tears as he went over to clap the supporters and after being spotted by Klopp, the midfielder was soon in a bear hug with his manager.

Speaking about the emotional embrace with Milner at the final whistle, Klopp told BT Sport: ‘I saw James Milner crying on the pitch after the game. It means so much to all of us. It’s the best phase of football.

‘There are more important things in the world. But creating this emotional atmosphere together is so special. It’s all about the players.’ 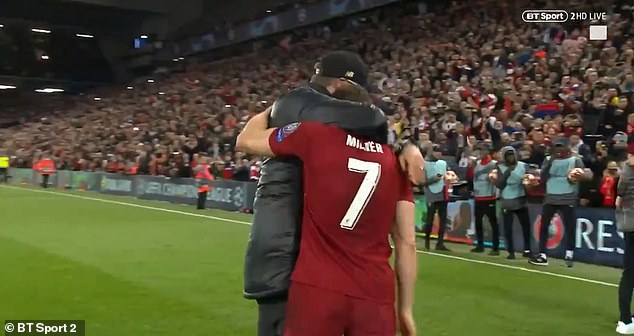 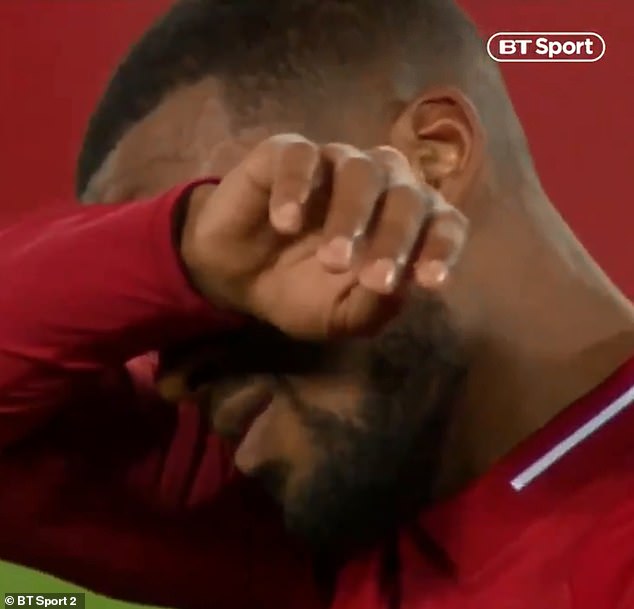 Georginio Wijnaldum, who hit a brace in the 4-0 win, tried to wipe his tears away at the end

This is what it means. This is passion. This is pride. This is Liverpool in the Champions League final. pic.twitter.com/tqpGxFhRoU

Milner was not alone in being overwhelmed by the occasion – arguably Liverpool’s greatest ever European night at Anfield – as Wijnaldum, one of the heroes in red on the night, also caught crying.

Liverpool have had famous European nights in the past with many entering the stadium hoping for a repeat of Liverpool’s 3-1 win over Olympiacos in 2004 or the thrilling 4-3 win over Borussia Dortmund in 2016.

They made a perfect start when Origi got the opening goal after seven minutes and despite being taken to half-time with the score at just 1-0, the second 45 minutes was among the finest Liverpool have played in Klopp’s tenure.

The magnitude of the occasion was not lost on anyone and it was no surprise that the tears flowed at full-time.

Fabinho made no attempt to keep his tears under control as he raced into the arms of goalkeeper Alisson Becker, who was colossal on the night making a host of crucial saves from Messi, Philippe Coutinho and Luis Suarez. 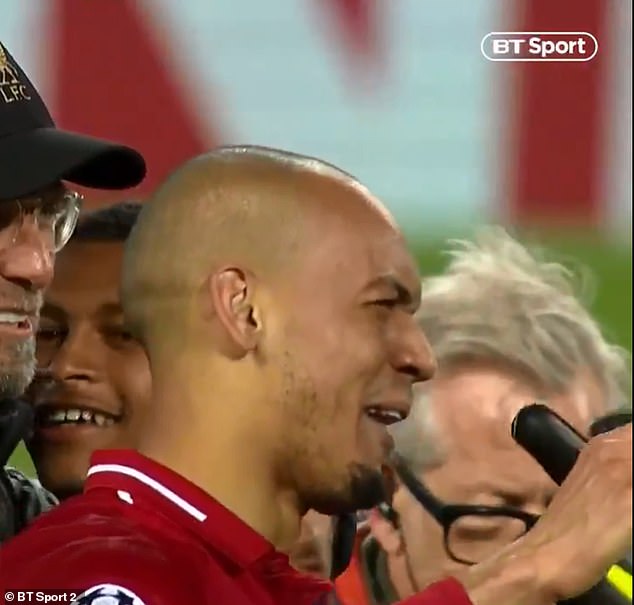 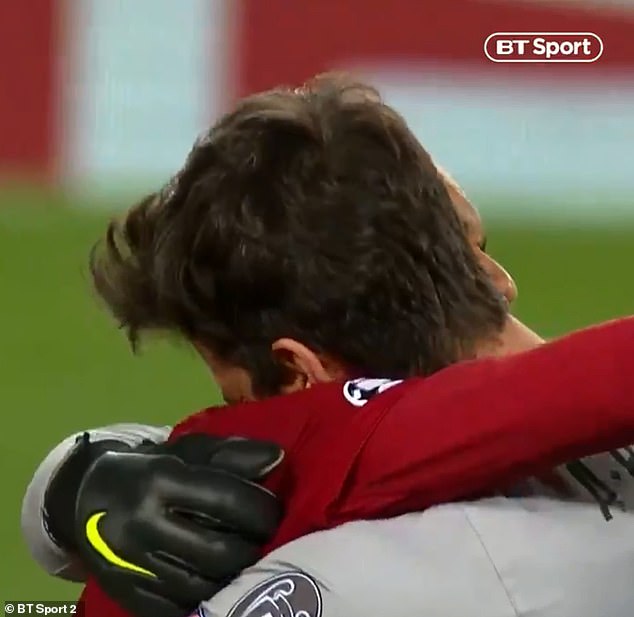 By reaching a second successive Champions League final, Klopp’s side will have the chance to go one better than 2018 when they were beaten in Kiev by Real Madrid.

Klopp could barely gather his thoughts in the immediate aftermath as he added: ‘The whole game was too much. It was overwhelming.

‘We played against maybe the best team in world. Winning is difficult but winning with a clean sheet, I don’t know they did it. It’s unbelievable.

‘The mix of potential and unbelievable heart is just a mix I never saw before. You have to be confident in a game like this. Divock (Origi) and (Xherdan) Shaq didn’t play a lot.

‘Putting a performance in like that, it was so important. It shows what’s possible in football. It’s so nice. It’s really nice.’ 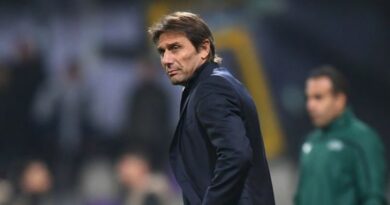 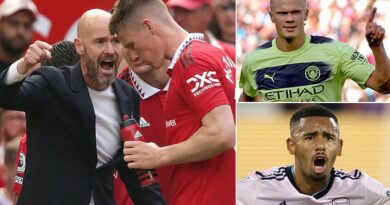 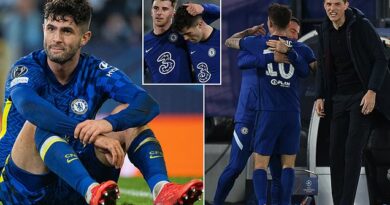