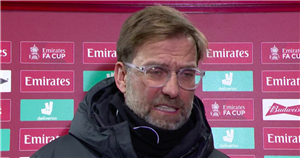 Liverpool boss Jurgen Klopp had no sympathy for Aston Villa on Friday evening.

The Champions League and Premier League winning manager picked a near-full strength side to take on what was a makeshift team of teenagers following a Covid-19 outbreak among the first-team.

The German insisted that he continued with the team that would have featured before the postive tests, but refused to offer some support to the opponents about the overall situation.

Before the match Klopp questioned whether Villa needed any sympathy, and admitted that he spoke to Dean Smith about the situation on Thursday about the health of his players. When asked if Villa had his sympathy on BT Sport, Klopp said: ”Do they need it?

“Of course I think for the boys it's nice that they can play. For the first team, of course, we all live in the same bubble. I spoke yesterday to Dean Smith so, so far they are fine.

“Yes they have a lot of infections. They are fine and of course we wish them our best and hope they come back quickly. For the game tonight that's how it is.

Before adding: "Yesterday we sat in analysis meeting with coaches and someone opened the door saying Villa had problems. Then later we were told a lot of their first team players were out.

“Then they said the training ground had shut down. Then we later learned of their situation.

"This is the side we would have started with tonight because we trained like that.

“Who cares? We want to go to the next round. What scenario will they say 'that was brilliant from Liverpool'?"

Unexpected Villa boss Mark Delaney then said: "It's been a manic couple of days. The manager rang up on Thursday and said 'it looks like you might have to take the game'.

"There are excited boys in there. They're looking forward to it. This is the biggest opportunity you can have.

"At the start of every season we say you have to be ready for these opportunities. Today it's as a group which doesn't happen often.

"We're missing some of the under-23 players who were training with the first team.

"We can match them with attitude, desire and workrate and that's all I ask. We've just done the meeting with the gaffer. He's spoken to the players in the dressing room [on a call]."

Conor McGregor suffers shock knockout defeat to Dustin Poirier on UFC return
We and our partners use cookies on this site to improve our service, perform analytics, personalize advertising, measure advertising performance, and remember website preferences.Ok