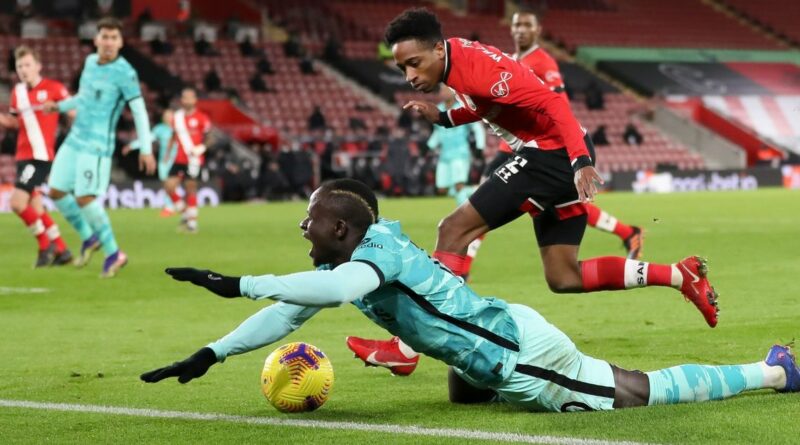 Jurgen Klopp blasted Manchester United's penalty record after Liverpool were denied what he felt were two spot-kicks in their defeat to Southampton.

Sadio Mane had a case for a penalty for the second game in a row after a challenge from Kyle Walker-Peters in the Reds' 1-0 defeat on Monday night.

And referee Andre Marriner was also unmoved when the ball hit Jack Stephens' hand as he went down to block a Gini Wijnaldum shot.

The defeat meant Liverpool and United are level on points going into their Anfield clash on January 17, with Klopp's side topping the Premier League table on goal difference having played a game more than their rivals.

And the Reds boss insisted his side should have had both decisions at St Mary's. Of the incident involving Mane, Klopp said: “I turned around, we had a really good view of it. It looked like a clear penalty.

"I turned to the fourth official, he said ‘we checked already, no penalty’. That’s the 100 per cent truth. They checked it already."

Mane also failed to win a penalty during last week's 0-0 draw at Newcastle, when he stayed on his feet as keeper Karl Darlow appeared to grab his leg just yards from the goal line.

Klopp said: “We had the situation last year against Leicester with the penalty, and people say ‘Sadio Mane goes down too easily’.

"If this boy went down easy, we could have had a penalty in this game and a stonewall penalty in the last game. But what Andre Marriner did with Sadio Mane tonight, I’m not sure that’s okay, to be honest."

And the Liverpool boss was furious when he heard a stat about United's penalty record.

“We cannot change," he said. "I hear now that Man United had more penalties in two years than I had in five-and-a-half years. I’ve no idea if that’s my fault, or how that can happen.”

But the officials were not the only ones to attract Klopp's ire, with the manager admitting he was “angry” with his under-performing players after they went down to Danny Ings’ early winner.

“I know they are great guys, super boys, fantastic football players, but tonight they were not good," said Klopp. "If I think they should have done better then I get angry, not for long, but I get angry.

“We don’t have to make it bigger than it is, but we didn’t win the last three games.

"That’s all our fault, mainly my fault, but the boys had a hand as well and we have to change that. If you bring yourself in a situation like you did tonight, against an opponent like Southampton, then you play with fire. "No, no, you do that because you put them under so much pressure that they cannot cope any more.

"Southampton tonight were on the edge of that, but we helped them. That’s all. We were not good enough tonight.”

Saints boss Ralph Hasenhuttl praised his players for their battling performance after he sunk to his knees at the final whistle to celebrate his first ever win over Klopp.

Hasenhuttl said: “He is an amazing manager and they are a fantastic team and, with all of our injuries, to do such a job, I cannot be more proud of the team. It was a special performance.

“We always speak about the limits we have as a club but it’s even more enjoyable when you can take wins like this. We showed it is possible to win against such teams. You need to have a perfect evening and it was one.”