Ramos’ goal was the crucial third of the first ever behind-closed-doors Clasico. It put Real Madrid 2-1 up and came from the penalty spot after VAR had advised referee Juan Martinez to check a shirt pull on Ramos by Clement Lenglet.

‘I hope one day they can explain to me how VAR works in Spain,’ said Koeman. ‘We have played five games and it has only intervened against Barcelona, never in our favour.’ 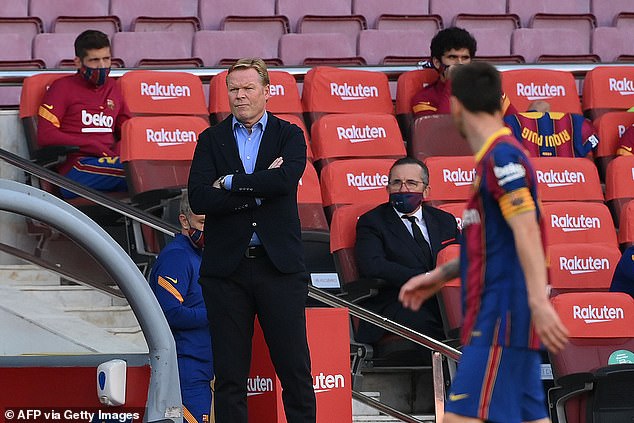 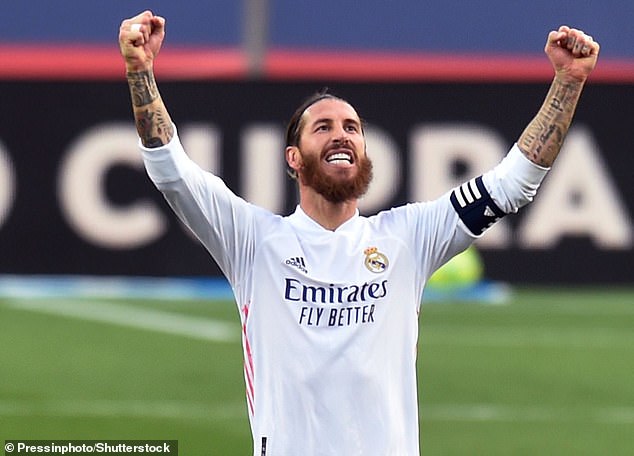 It was a convenient alternative narrative. In the subsequent press conference, of the seven questions he faced, four were about the penalty and only two about the match.

That spared him from a grilling over why he picked 17-year-old Pedri to play out of position on the wing ahead of Antoine Griezmann. Or why there was a complete lack of reaction after his team went behind, falling to a second straight LaLiga defeat.

And why he waited until the 81st minute to make his first change, even though Ramos’s 63rd-minute goal had sucked all the belief out of his team.

That triple change — bringing on Griezmann, Ousmane Dembele and Francisco Trincao — left Barcelona with five attackers on the pitch. They confused themselves more than Real, who controlled midfield and were able to grab a third through Luka Modric.

Lionel Messi cut a forlorn figure late on. He has clocked up 515 minutes (six Clasicos) without scoring against Real.

It wasn’t all bad news for Barca. Ansu Fati will not be 18 until next weekend but he became LaLiga’s top scorer when he equalised Fede Valverde’s opener by converting Jordi Alba’s cross from close range, his fourth goal of the season. 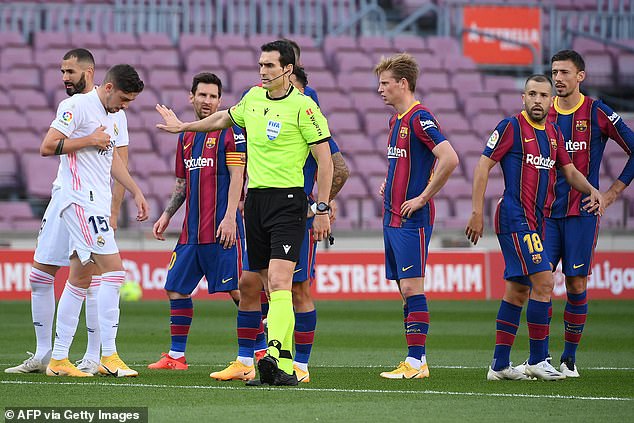 The 19-year-old Sergino Dest was also impressive. The first American to play the Clasico did well at right back and also caught Spanish television out when he was put up for the post-match pitchside interview and told them he only spoke English. American English of course. His first answer explaining how he felt about the defeat? ‘I’m p****d!’

Zinedine Zidane was dignified in victory. His happy knack of winning the games that matter most rarely lets him down.

Never mind embarrassing defeats by newly promoted Cadiz and Champions League outsiders Shakhtar Donetsk, this was his seventh game in charge of Real Madrid at the Nou Camp and he has still never lost.

He passed up on the offer to ram the result down the throats of his critics: ‘We are not here to shut people’s mouths,’ he said. ‘We’re just here to do our jobs.’ 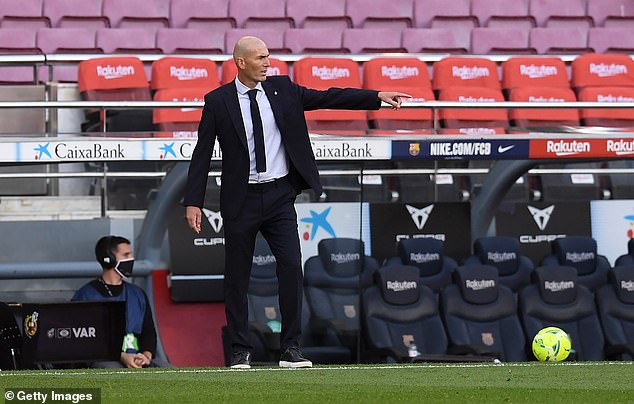 It was an important victory for Zinedine Zidane, whose job was potentially on the line

Koeman will not be under too much pressure now, even if he loses to Juventus in Turin on Wednesday. Barcelona are in enough institutional chaos, with elections planned for March and likely to be brought forward to January after a vote of no-confidence, to even contemplate a change.

Zidane was the coach whose job was potentially on the line. With Mauricio Pochettino out of work and Raul already at the club coaching the youth team, there are two accessible replacements on hand.

But Zidane came out of another must-win game wearing pretty much the same confident half smile that he wore when he went into it — unruffled and with a six-point lead over Barcelona, who are back on the canvas full of self-doubt and raging at VAR.

Chelsea player ratings vs Southampton: Werner gets 9 but Kepa flops again in 3-3 thriller

Man Utd fans love Bruno Fernandes’ reaction after breaking another club record
We and our partners use cookies on this site to improve our service, perform analytics, personalize advertising, measure advertising performance, and remember website preferences.Ok