Barcelona boss Ronald Koeman insists that he is not "the villain of this film" after Lionel Messi blasted the club over the manner of Luis Suarez's exit.

Forward Suarez joined Atletico Madrid on a two-year contract on Friday, leaving Barca after 198 goals in six seasons at the club.

It had been made clear to the Uruguayan that he had no future at Barca shortly after Koeman's arrival last month, with the Dutchman also tasked with shipping out other older members of the squad including Ivan Rakitic and Arturo Vidal.

Messi, who had his own transfer issues at Barca this summer, was furious that his close friend Suarez was being told to leave with one year left on his contract, and he slammed the club for "throwing out" the forward in an emotional Instagram post on Friday.

Former Barca stars Neymar, Samuel Eto'o and Dani Alves reacted to that post by backing up their former teammate, and Koeman was asked about the saga at his press conference on Saturday, when he blamed the club's board.

“It seems that I have been the villain of this film,” the Dutchman said.

“But before I arrived here, some decisions had already been made and I supported those decisions – it wasn't up to me.

“I only showed respect to Luis Suarez as a person and a player. I told him that if he stayed it would be difficult for him to play but that he would be part of the squad.”

Discussing Messi's mood in particular, he added: “It's normal that Messi is sad when a friend of his leaves the club.

"But Leo has been an example for everyone in training and in games.

"Not a training session goes by in which he has not shown great commitment. I have no doubts about him.”

Were Barca right to sell Suarez? Have your say in the comments below 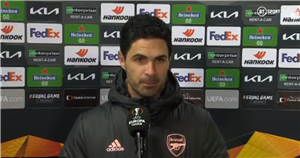