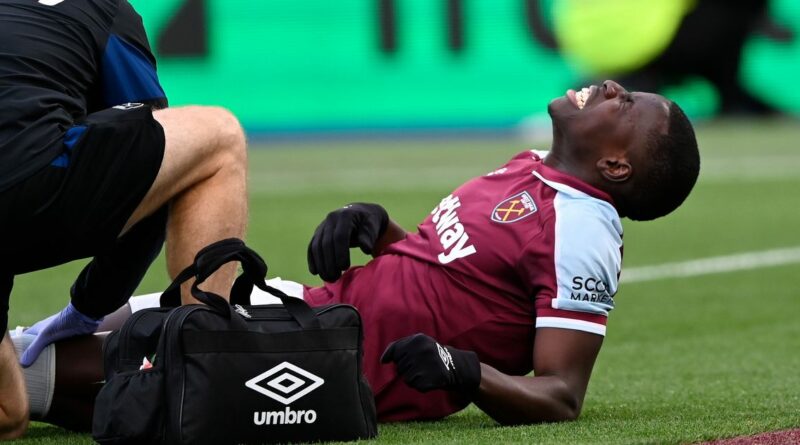 West Ham United have suffered a major blow to their hopes of securing Champions League football this season after news emerged confirming a mid to long-term injury to Kurt Zouma.

The defender suffered hamstring tendon damage in the 3-2 win at home against Chelsea on Saturday before having to be replaced by Arthur Masuaku.

Zouma, 27, has been a revelation at the back for David Moyes’ side since his £30million move to the east Londoners in the summer.

But Moyes would undoubtedly have been left gutted when the centre-back limped off during the victory over his former club, where he won a Champions League title last season.

West Ham confirmed the injury in a statement on Tuesday morning, saying: "A scan on Monday revealed the damage and the 27-year-old French international defender has already started his recovery programme at Rush Green under the supervision of the medical team."

While there is no time-scale on the injury, the Frenchman is expected to miss several months of action.

It comes less than a month after the Hammers’ other starting central defender, Angelo Ogbonna, suffered a devastating anterior cruciate ligament injury in a win over Liverpool.

That leaves Moyes with just two central defenders in Craig Dawson and Issa Diop available as he looks to keep up his side’s brilliant performances this season.

Do you think West Ham need to sign a defensive replacement in order to secure a top-four finish? Let us know in the comments section.

The fourth-placed Hammers are reported by the Evening Standard to be looking to sign several defenders in the January transfer window in a bid to secure a top-four finish.

Among those are believed to be Burnley’s James Tarkowski and a loan move for out-of-favour Manchester City defender Nathan Ake.

Both have an abundance of Premier League experience and would add some much-needed depth in the coming months.