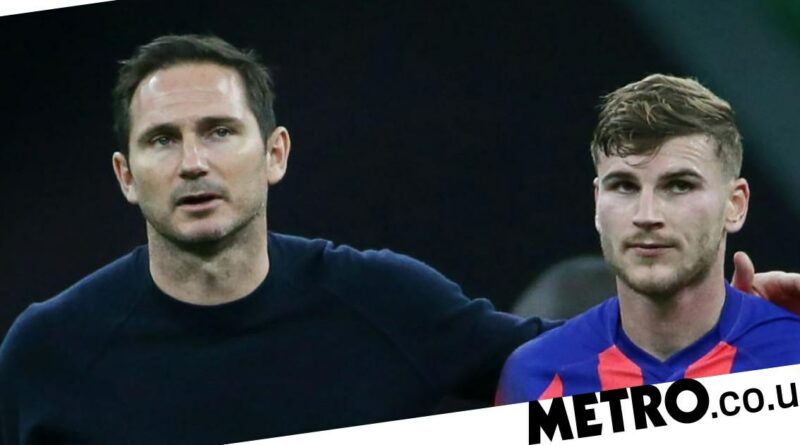 Frank Lampard admits Timo Werner is struggling for confidence as his Chelsea goal drought continues, but has encouraged his misfiring striker to keep working hard in training and turn his form around.

Werner has gone 11 games without a goal for the Blues, which has coincided with a downturn in results as Chelsea have won just one of their last five contests.

The German had been making an encouraging start to life at Stamford Bridge after his summer move from RB Leipzig, scoring in four consecutive games over October and November. but has been stuck in a sticky patch ever since.

Having started Chelsea’s first 15 Premier League games this season, Werner was finally dropped from the starting XI, coming on as a substitute in the 1-1 draw with Aston Villa last time out.

Chelsea host Manchester City on Sunday and it is yet to be seen whether Lampard will restore the 24-year-old to the line-up, after conceding that his confidence is not good.

‘In terms of scoring goals, I always found – and I’m not talking for Timo here – that every player goes through tough times in front of goal,’ Lampard said.

‘When you work like that, it is a matter of time because his natural attributes will get him in front of goal and get him away from defenders and will get him those chances again.

‘If his confidence comes down from missing a couple, that is only natural. It is my job to help him with his confidence and be positive and push in a positive direction and I feel the goals will come.’

‘On the training pitch, I’d be doubling down on work. I would get someone to knock balls into me from little angles, just behind the goal,’ Shearer told the Athletic.

‘I’d stand five or six yards out and just roll shots into an empty net. Maybe that sounds simplistic, but I’d do it time and time again, just to build my confidence up.

‘Then I’d bring in a keeper — a first-teamer wouldn’t do it, so I’d rope in someone from the youth team — and do the same thing.