Chelsea boss Frank Lampard has been warned that he could face the sack if the Blues' recent run of poor form continues and they miss out on a spot in the top four.

After losing their second Premier League game of the season to reigning champions Liverpool, Chelsea went on a nine-game unbeaten run.

However, that was ended with a 1-0 loss to Everton and Chelsea's 3-1 defeat to a struggling Arsenal side on Boxing Day was their third loss in their last four league games.

Former Chelsea midfielder Craig Burley has claimed the Blues are looking like "one of the most pedestrian" sides in the league and claimed that "if they don't get in the top four, he's [Lampard's] done".

Speaking to ESPN, Burley said: "[Lampard's] got players out of form, he’s got players that are not fully fit, and that’s a problem. They have gone from looking one of the paciest, quickest sides in the Premier League, to one of the most pedestrian.

"That is a huge issue for him because you may have noticed with this owner Roman Abramovich, he doesn’t suffer inconsistency, bad results, no matter who it is.

"So let me be clear, Lampard is back on the chopping board currently as we speak. It’s turn-up time for Lampard and these players. This cut and thrust period can make and break you.

"I’m not suggesting Abramovich is going to sack him in the next couple of weeks, but there is one thing they need to remember – top four.

"If they don’t get in the top four, he’s probably done. It’s a big season for him. It looked as if it was going swimmingly and now it looks like they’re sinking a little bit. They seem to have a weight around their feet. He’s going to have to find the reason to put it right."

Chelsea will be looking to bounce back from their defeat to Arsenal when they host Aston Villa on Monday. 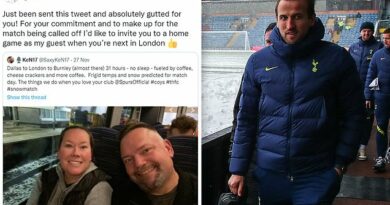 Premier League urges clubs to warn fans to stay away