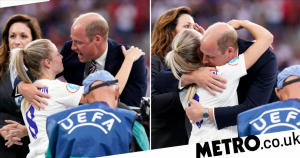 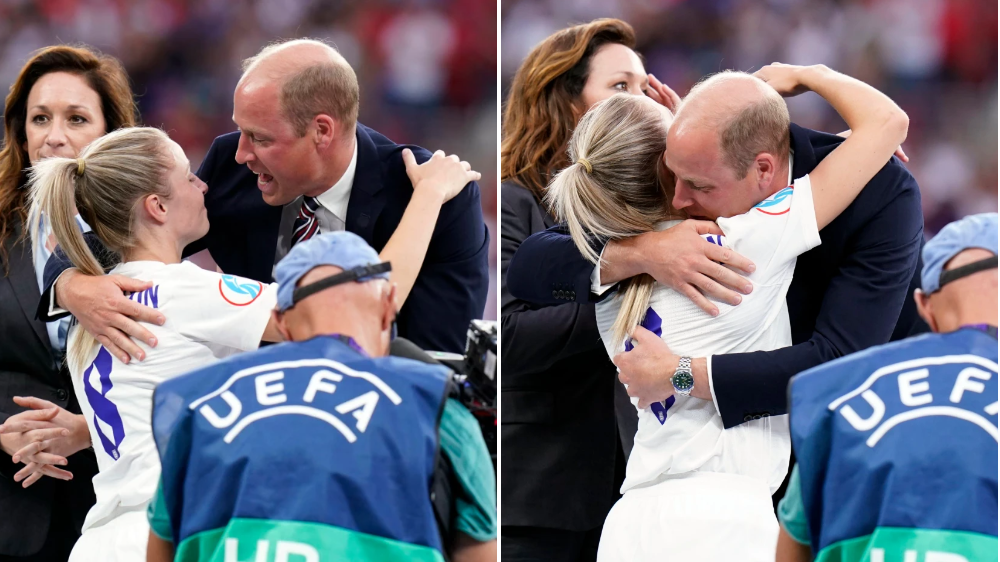 England captain Leah Williamson has revealed what Prince William said to her during Sunday’s Euro 2022 trophy presentation after sharing an embrace with His Royal Highness.

The Arsenal defender hardly put a foot wrong all tournament and gave another assured and composed display at the back against Germany at Wembley, as goals from Ella Toone and Chloe Kelly secured the trophy.

In his role as President of the Football Association, the Duke of Cambridge was part of the line-up of officials who congratulated England’s victorious Lionesses as they collected their medals and made their way to the trophy presentation stage.

While most players only got a handshake and a brief congratulations from Prince William, a few players got an unexpected hug.

Among them was skipper Williamson – the last player to make her way along the line-up before lifting the trophy – who shared a touching moment with a beaming Prince William.

The two spoke for several seconds, with His Royal Highness pulling England’s skipper in for a massive hug, and seemed visibly moved, giving Williamson a hearty round of applause as she collected the trophy.

Asked about the hug, and what was said, Williamson revealed: ‘I think I went to shake his hand and he said, “Leah, bring it in” and I said, “Thank you sir”. He was like, “I’m very proud of you all”.’

Williamson was also thrilled to receive such a heartfelt message of congratulations from the Queen, adding: ‘I’m a big fan of the royal family so it means a lot.’

The 2-1 victory over Germany was played out in front of a record crowd of 87,192 at Wembley while 17.4million people tuned in to watch the match on BBC One making it the most-watched programme of 2022 so far.

Williamson believes England’s victory goes far beyond their exploits on the pitch and will have a big impact on society at large, as well as the perception of women’s football.

‘The legacy of this tournament is a change in society. We’ve brought people together and got people to this game,’ said Williamson in a passionate speech straight after the match.

‘The legacy of this team is winning and this is the start of the journey.’

‘It’s the proudest moment of my life until the day I have kids I suppose. I’m going to lap it up. I want to relive it over and over and I’ll be reliving it for a long time.’