Marcelo Bielsa acknowledged his heart was racing after his Leeds side came from behind to win a pulsating match and deliver a psychological blow in the Championship’s automatic promotion race.

On a day of the highest drama in pursuit of a Premier League prize, Leeds twice went behind and missed a penalty but were propelled into second place by a brace from their mercurial matador Pablo Hernandez.

Having equalised during the first half, the former Spanish international settled a tetchy affair, against a club that has held a hex over them in recent years, seven minutes from time. 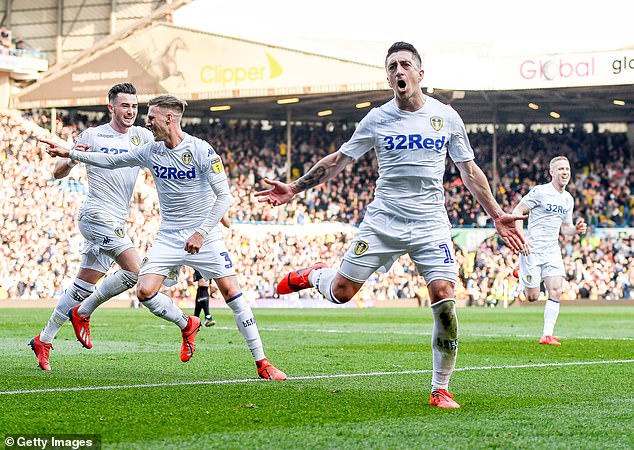 Things had looked so different less than a quarter of an hour earlier but Luke Ayling emerged from right-back to haul Leeds back to 2-2 and with Bristol City overturning their own deficit 40 miles down the M1, the advantage Sheffield United opened here a fortnight ago was overturned.

Home defeat to United before the international break meant that Leeds’ destiny was no longer in their own hands with eight league fixtures remaining.

Not that the locals were giving up on their dream of ending a 15-year exile from the Premier League via the automatic route. ‘Believe’ read a montage created by those crammed into the East Stand. 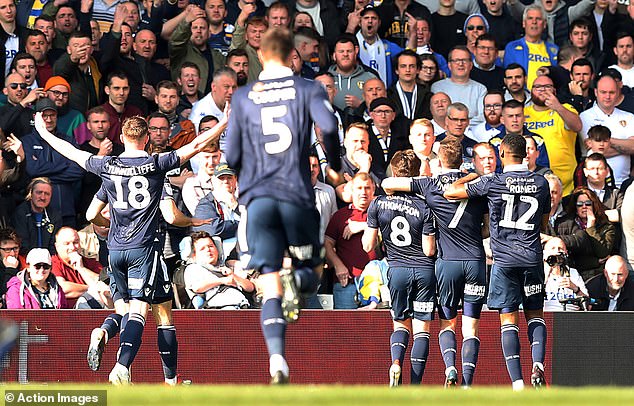 By the end, they had experienced every emotion this time of the season provokes. ‘I can feel my heart,’ Bielsa, their Argentine head coach, reflected afterwards.

Millwall have proved testy opponents for Leeds in recent times, claiming the points via a 4-3 scoreline in the corresponding fixture last season.

Jed Wallace, the scorer of the 90th-minute winner on that occasion, started off where he left off by tormenting the United defence from kick-off. 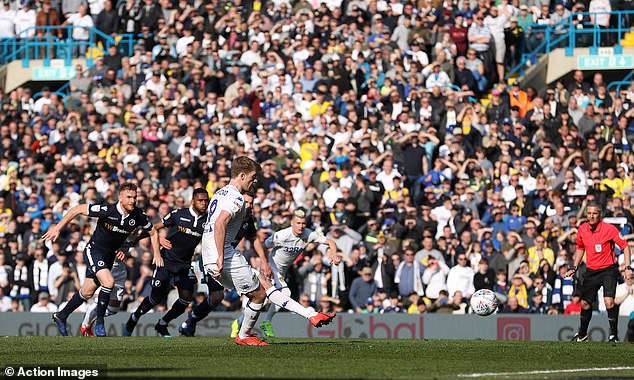 There were just 20 seconds on the clock when his low cross picked out Ben Marshall, whose shot was blocked by Luke Ayling. Wallace’s fifth minute effort was then turned behind for a corner by Bailey Peacock-Farrell, back in the Leeds goal due to Kiko Casilla’s suspension.

Peacock-Farrell was given no chance in the 10th minute, however, when Mahlon Romeo was rewarded for his efforts to keep the ball in play.

The Millwall full-back got chalk marks on his boots in slinging the ball into the middle and there was Ben Thompson, scorer of a double in the 2-0 win at Birmingham that preceded Millwall’s cup heartache, to apply a clinical headed finish. 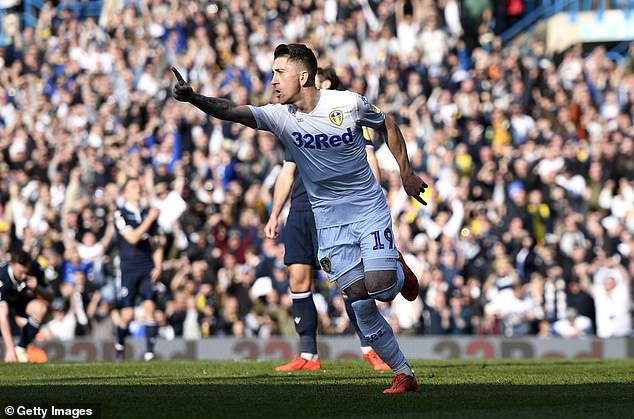 The lead looked like only lasting eight minutes when Wallace found himself on the wrong side of Ezgjan Alioski and referee Darren Bond pointed to the spot.

But Millwall goalkeeper David Martin, whose last-gasp gaffe last weekend against Brighton cost the London club a place in the FA Cup semi-finals, redeemed himself by keeping out Patrick Bamford’s panenka-style penalty with his feet.

Unsurprisingly, it was Hernandez, the first Leeds player to make it into double figures for both goals and assists in a season for seven years, who showed the level of composure required in front of goal in the 34th minute, sweeping home Ayling’s pull-back. 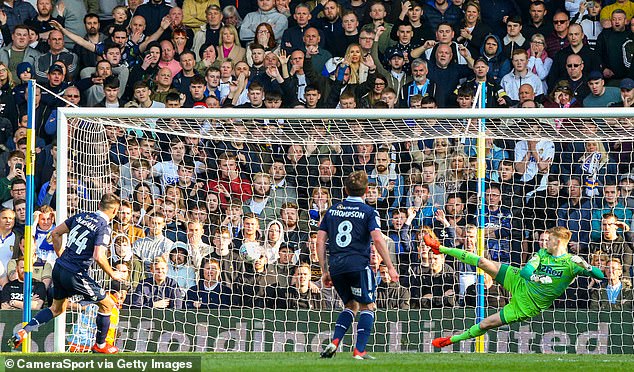 ‘Pablo is a leader. He’s not a leader who likes to talk a lot or likes to shows it but he’s usually the one who asks for the ball and for balls which are difficult to receive,’ Bielsa said.

‘He tries to take risks which are hard for a player to take. He always keeps the feeling that we can hurt the opponent every time.’

Typically, though, Millwall restored their advantage 10 minutes into the second half as Ben Marshall – like Thompson returning from suspension – won and converted a penalty that triggered an unsavoury response from those behind the goal as the visitors’ celebrations were met with a shower of missiles. 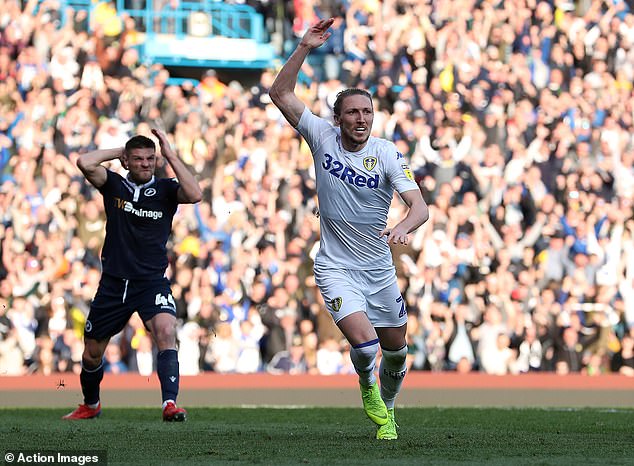 The response on the pitch would have been more pleasing to those in the boardroom fearful of reprisals from the authorities.

Bielsa sacrificed one of his central defenders, Pontus Jansson, for extra attacking firepower and was rewarded when his full-backs combined 20 minutes from time, as Ayling rose highest to power in substitute Barry Douglas’ clip into the danger zone.

Whether or not Jansson should have left the field via a different scenario was up for debate following the blocking off of Wallace minutes earlier. Millwall manager Neil Harris took up the incident with referee Darren Bond post-match. 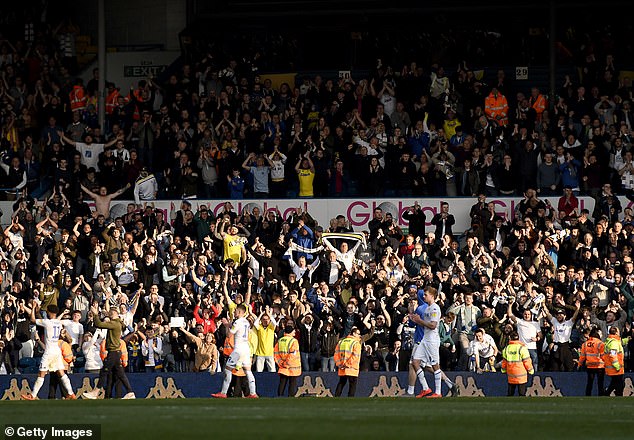 ‘He’s given a yellow card for stopping his progress moving forward. I asked him if it was cynical play using the arm or the elbow. He said no. It was 2-1 at the time and I thought the fine margins fell Leeds’ way quite a few times throughout the game,’ Harris said.

Leeds’ second equaliser coincided with Sheffield United re-taking the lead over Bristol City but two further goals had gone in at Bramall Lane by the time Tyler Roberts danced through opposition bootlaces to tee up Hernandez and descend Elland Road into pandemonium.

Leeds now have a two-point advantage over the field and, like the clocks, appear to be moving forward in decisive manner.