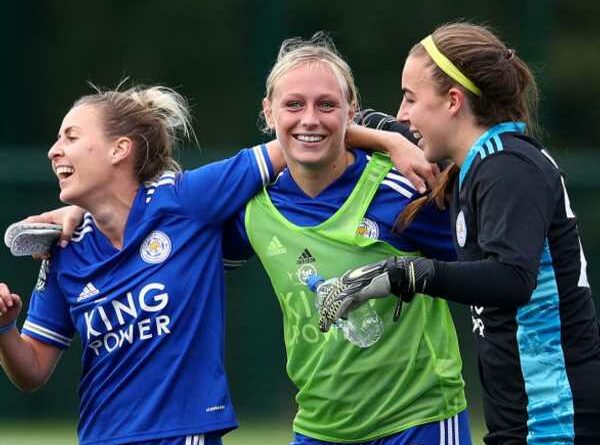 Leicester made history after clinching the title at the weekend

Leicester secured promotion to the Women’s Super League for the first time after beating London City Lionesses 2-0 at home.

Sam Tierney and Natasha Flint were on target for Leicester, who have also clinched the Women’s Championship title with two games remaining.

The Foxes have won 15 of their 18 league fixtures this season, losing just once, as a 12-game winning run has lifted them eight points clear of second-placed Durham.

The Hammers climbed off the bottom of the table at the weekend with a sensational 5-0 win over Reading.

Meanwhile at the top of the WSL, Chelsea moved two points clear of Manchester City as Sam Kerr hit a first half hat-trick in a 6-0 win over Birmingham.

Leicester City Women, founded as an independent club in 2004, only turned fully professional in 2020 after being bought by Leicester’s parent company King Power.

The Foxes, who played in the Championship’s inaugural season in 2018-19, finished sixth in the table under manager Jonathan Morgan last season.

UEFA warns it will not amend Champions League qualification process