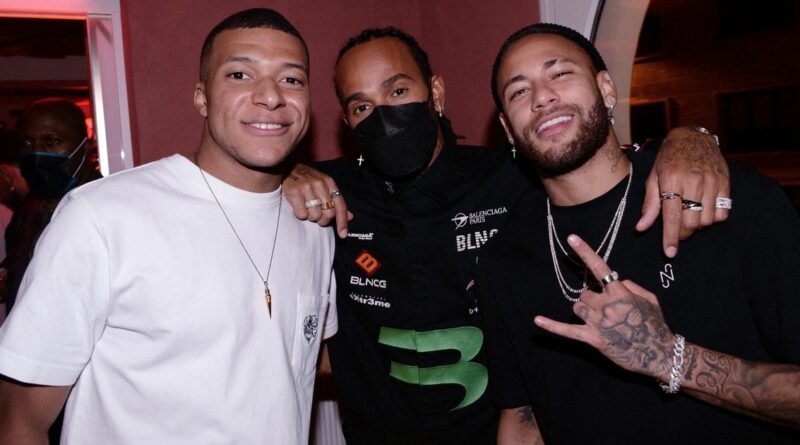 The French fashion icon hosted a star-studded event at the stylish Trattoria restaurant in Paris and lived up to recent tradition by inviting a number of PSG players.

Neymar attended Bruna's 25th birthday party in 2019 and Marco Verratti was present for her 26th last year, while Mbappe made it a hat-trick with a third consecutive appearance last week.

The trio were joined by Formula One legend Hamilton, who is in the French capital for Paris Fashion Week after winning his 100th race at the Russian Grand Prix in late September.

The victory extended the 36-year-old's lead over Red Bull rival Max Verstappen in the drivers' championship to 22 points and he was clearly in a celebratory mood as he arrived in the city.

"While I’m in Paris, please call me Louis," Hamilton posted on Instagram, before sharing a number of pictures on behalf of Balenciaga as well as a snap alongside Mbappe, 22, and Neymar, 29.

He captioned the post, " Always a pleasure," while Neymar also posted a picture from Bruna's birthday bash of him embracing the birthday girl.

Bruna shared many pictures of the festivities on her own Instagram page and wrote: "We did it again. Thanks to all my friends for celebrating my birthday with me ! I love you all."

Although Neymar, Mbappe and Verratti seemed to be having a brilliant time on Friday, their weekends ended in disastrous fashion as PSG suffered a shock defeat at Rennes on Sunday afternoon.

Will Paris Saint-Germain win the Champions League this season? Have your say in the comments.

The trio all started as Mauricio Pochettino's side were beaten 2-0 and there were ugly scenes outside Roazhon Park as fans clashed after the match.

"Yes a bit. No one likes to lose," said PSG boss Pochettino after the match when asked if he was angry about the result.

"Without underestimating what Rennes has done, we are frustrated and disappointed not to have taken our chances and to concede these goals.

"These situations leave us bitter and disappointed. We didn’t start the game well but then we had 25 to 30 minutes of good quality.

"It was a shame not to score. We took two psychological hits, just before half-time and just after. The match afterwards was open, even if we created chances.

"We had a hard time after that. Rennes obviously gained confidence. And with us, there was frustration."

Hamilton will hope to fare better than his PSG pals on his next outing as he returns to action for Mercedes at the Turkish Grand Prix on Sunday.