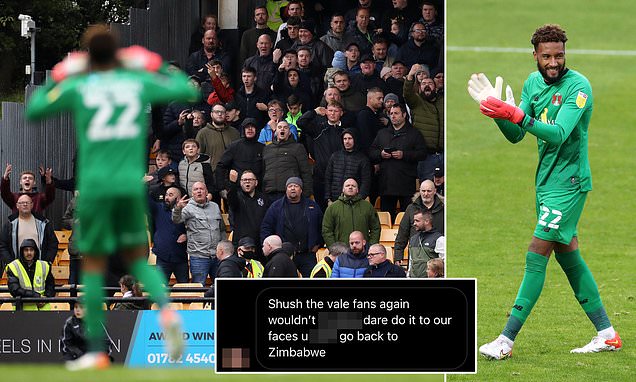 ‘It just feels like it’s getting WORSE… People need to be educated and held accountable’: Leyton Orient goalkeeper Lawrence Vigouroux says he was quick to post racist threats he received online after a previous abuser deleted their message

Five years ago Lawrence Vigouroux opened his Instagram account to discover racist abuse waiting for him but the sender was able to delete the evidence and escape the repercussions.

So when it happened again last week, in the latest case of an issue that is blighting the game and society, the Leyton Orient goalkeeper’s response was very different.

‘I’ve had it before,’ former Tottenham and Liverpool youngster Vigouroux, 27, recalled.

‘I was playing for Swindon against QPR in the Cup and we lost on penalties. After a fan messaged me something racist. I just completely lost my head, blew up and kind of made the situation worse. ‘Because I was so angry I just replied, didn’t even screenshot the message, which was a big mistake. I said: ‘what are you saying that for? How can you say that?’ Straight away he deleted the message and said ‘my mate took my phone.’ The standard reply.’ 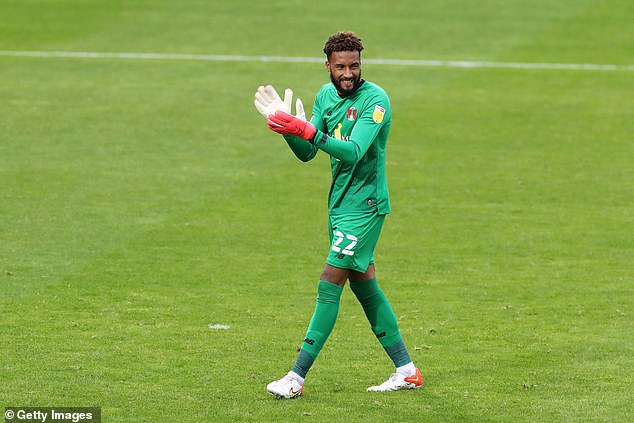 There was no opportunity for the culprits to worm their way out last week.

‘I saw them and thought ‘this has happened to me before’ but I never, ever put it out there.

‘I look at people like Marcus Rashford, Romaine Sawyers, they’re putting it out there. I thought ‘I’ve had enough now.’

‘It’s one thing calling me rubbish or whatever. That doesn’t bother me. It’s part and parcel of football and mentally I can deal with it.

‘But it’s another thing to say ‘go back to Zimbabwe’ or call me a monkey who should go back to the jungle.

‘I thought it would be better out in the open where people can see it because before people were making fake accounts. I’m seeing people use their real names now.

‘They don’t even hide it anymore, which is what I find the saddest thing of all. I just wanted to raise awareness so people can see this is still going on in this country.

‘I find it sad that someone can think they’re superior because they’re a different skin colour to me.

‘That was the main thing I took away from it. I was quite sad that that was the first thing that came into someone’s head after a game of football. It’s mind-boggling really.

‘I thought things would be different now but it just feels like it’s getting worse.

‘People need to be educated. People also need to be held accountable and if you do send a message like that you need to be ready to face the consequences.

‘That’s something I hope happens not just for me but for everybody who experiences racist abuse whether that’s in football, the workplace, wherever.’ 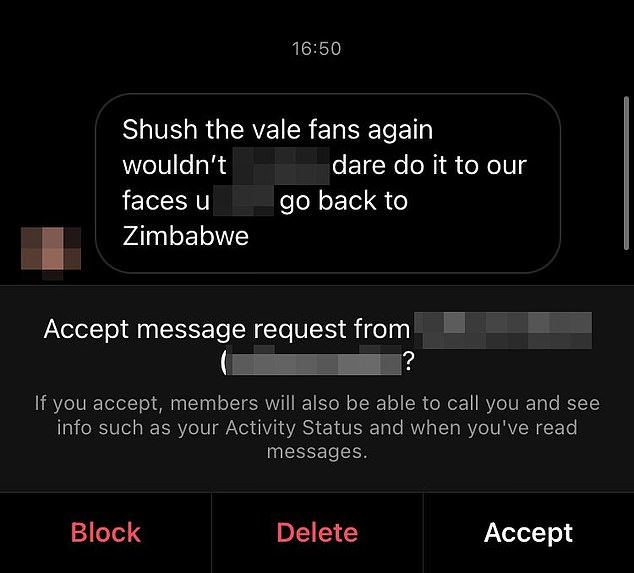 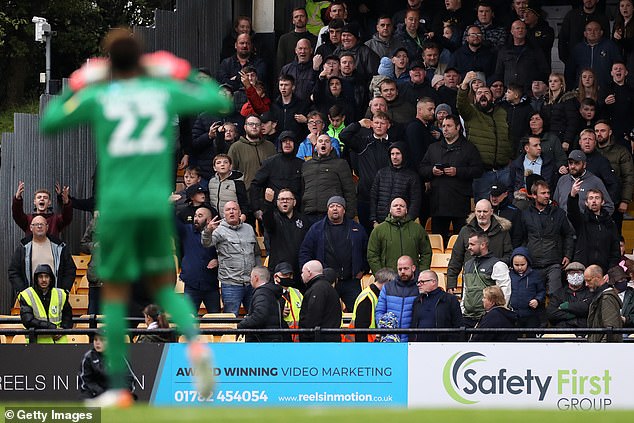 Vigouroux received a personal apology from Port Vale owner Carol Shanahan along with many uplifting messages he was also grateful for from fans of other clubs. Another standout show of support came from footballer-turned-Fresh Ego Kid clothing brand owner Marvin Morgan.

Morgan has also set up a team Fresh Ego FC, which Vigouroux’s plays for in their awareness-raising games, as part of a drive to help highlight issues such as racism and mental health in football.

Vigouroux said: ‘As soon as I put the post on Twitter he was one of the first people to call me to offer support in any way. He’s been a real help throughout this. He’s doing really good things with Fresh Ego FC to highlight some of the issues in our game and if we all stick together – everybody, not just all the black players – I feel like we can make a big change.’

Time and age have changed Vigouroux, as his handling of the sickening abuse this week compared to previously, indicates.

He came through at Spurs, got to test himself in training against stars like Harry Kane, Jermain Defoe and Luka Modric and worked under Les Ferdinand, Chris Ramsey and Tim Sherwood in the reserves before leaving for Liverpool and later joining Swindon. 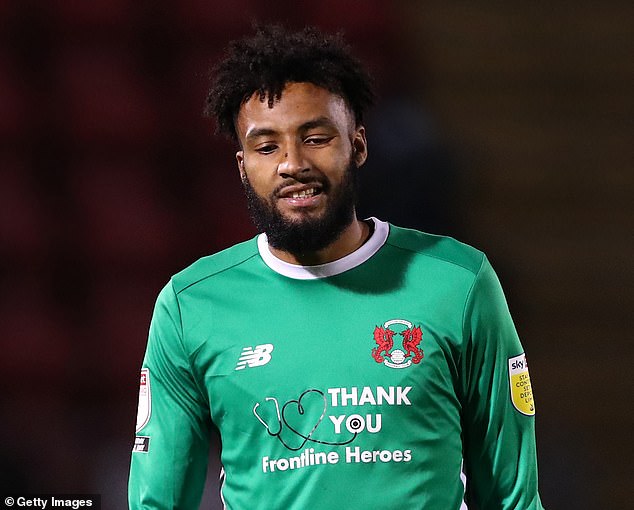 Back in his younger days, Vigouroux admits he was ‘self-orientated’ and viewed the game from an individual perspective rather than putting his team first.

‘We would lose but I’d play OK and think ‘I’ve done alright, it doesn’t matter,’ he said.

‘I got player of the year [at Swindon in 2017] but we got relegated. I didn’t really care because I did well personally. I was just like ‘it’s fine, I’ll leave’ or whatever.

‘I wasn’t very team orientated and that’s one regret I have with my career.’

Another came at Swindon when Vigouroux, upset at what he felt was an undeserved punishment, paid a £50 fine in pennies.

He quickly took the coins back and paid the fine in notes but the damage was already done.

That infamous episode has also followed him around and contributed to the perceptions of Vigouroux among some in the game which have held him back.

But during his six-month spell in Chile in 2019 at Everton De Vina Del Mar a penny of a different kind dropped.

Not playing and being alone abroad away from his young family gave Vigouroux plenty of time to think.

‘It was then I realised the way I’ve been acting is not acceptable,’ said Vigouroux.

‘I needed to be more supportive [as a teammate]. I had enough of not playing but my attitude was actually the best I’ve ever been in my career.’

That has continued since he returned to England and joined promotion hopefuls Orient, starting every league game for the club since February 2020.

‘I feel like that period of five, six months of not playing really helped me mentally,’ said Vigouroux, who faces his former Swindon manager from the fining episode on Saturday when Orient travel to Mark Cooper’s Barrow. 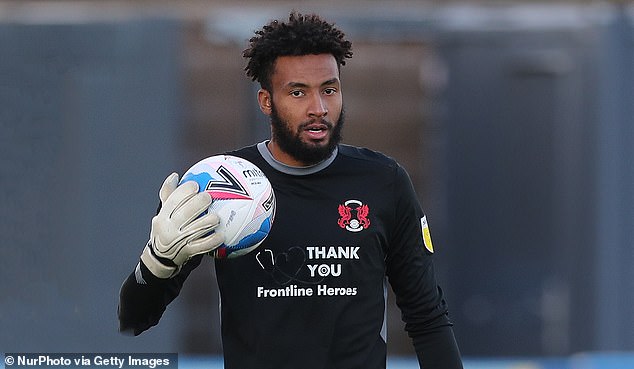 ‘Before, people would say ‘you drew 0-0 you got a clean sheet.’ Now I’m fuming because I want to win.

‘I want to win every game and get promoted with this club. That’s my sole focus this season.

‘I realise now it’s not just about what I am on the pitch it’s about the whole package and not being basically an idiot really, doing stupid things, paying fines in pennies, going out with teammates when we’ve got a game in three days.

‘I speak to my agent and it [people’s perceptions] is something that comes up. I feel like that held me back before but that’s something I can’t help now.

‘I can only influence what happens in the future so hopefully going forward that is something that can be changed.

‘People can change and I feel like I’ve grown up, matured. A lot of things in football are not about how good you are but what you’re like as a person, if you’re a leader, a good influence to the young players.

‘I try to be that every day and feel like that’s something that has really come on in the last year-and-a-half since I’ve been here.

‘With age, game-time and experience you learn to understand it’s not just about you, it’s about everyone.’

‘Buy a ticket and just hit it’: Nabbout’s strike breaks the shackles 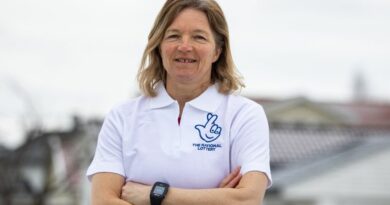 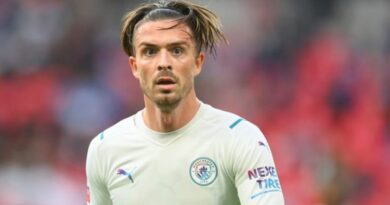