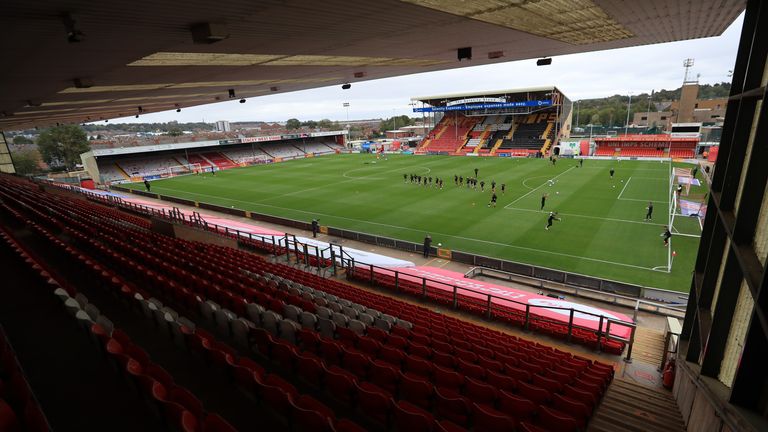 Lincoln City say the coronavirus pandemic has so far cost them around £900,000 in missed revenue, and they expect even greater losses in the future.

Lincoln are one of the first clubs in the English Football League to talk publicly about the impact on their finances.

The club’s chief executive has told Sky Sports News their projections suggest they can survive the rest of this season without fans – but that a number of clubs in the lower leagues will go to the wall if supporters are still absent for season 2021/22.

Liam Scully thinks Lincoln’s financial difficulties are on a par with most other League One clubs right now.

Lincoln have published their accounts for the year ending June 2020, which included the first four months of the pandemic, and so the bulk of the financial impact has yet to filter through.

“We lost six home games last year (season),” Scully said. “The matchday income is the lion share of what we receive. The impact was huge. We estimate the loss of income was £900,000 for that 14-week period (March-June). We made some cost savings. Not running matchdays, there are some operational savings. There were various things we did at the football club; working with fans, sponsors, investors and shareholders. The net impact was around a half a million pound loss.

“Lincoln City in a regular year have a turnover of around £5.5m. All you got to do is extend that over this season and it shows the challenges all clubs at our level are facing.

“The net impact is somewhere between £500,000-£1m over 15 weeks. What will that be over a 52-week period? We are going to get quite close to a year milestone or beyond when we hopefully do get fans back in grounds at some point this season.”

Scully says Lincoln have been saved to a large extent by the fans – 80 per cent of season ticket holders agreed to forego refunds last season, in exchange for shares in the club, to help it survive.

He added: “The phenomenal support we have had from the fans has gone a long way. We would not expect support at that level from our fans. It was beyond our wildest expectations and for that we are forever grateful.”

Lincoln sit top of League One despite having to reduce player wages, something he believes will impact clubs at their level for the next few years.

Scully does believe the bailout from the Premier League will help mitigate losses and help keep clubs in the third tier afloat.

He said: “We cut the pro budget by 40 per cent. I have got to give great credit to Michael (Appleton) and the recruitment team and everyone involved on the football side for everything achieved on the sporting side so far this season.

“We have had the Premier League rescue package. It is far from perfect. The regular consolidated ask was £50m, we have got £30m + £20m conditional grants. It’s a contribution and it definitely helps. We are pushing problems a little bit further down the road.

“If football fans are allowed back into stadiums at the start of next season it is not going to spring back to normal. It is going to take a three or four year period to recover from this.

“We are cautiously optimistic we may get fans back in the ground towards the back end of the season. Certainly in our long-term cash flow and long-term planning, absolutely by the start of next season we are hoping to see full stadiums. [We won’t be able to survive] a great deal further than what we have forecasted at this moment in time.”