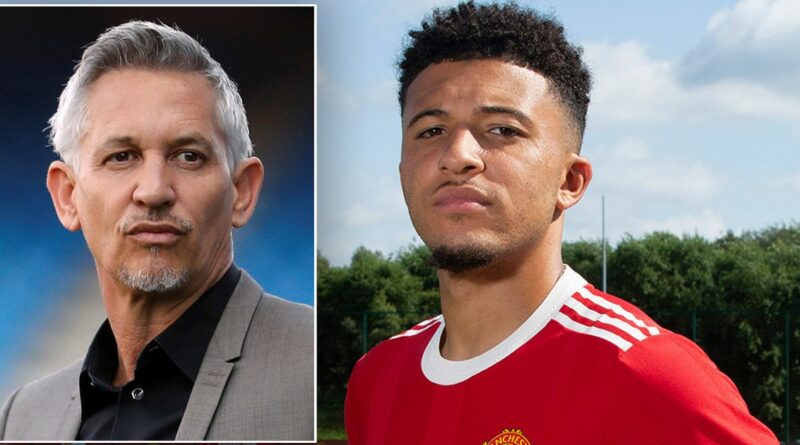 Gary Lineker has handed Manchester United his seal of approval after the club completed the signing of Jadon Sancho.

The 21-year-old arrives at Old Trafford on a five-year deal after the Red Devils paid Borussia Dortmund £73million to end a long-running transfer saga.

Sancho, an England international and former Manchester City academy player, impressed in limited minutes for England at Euro 2020 and had the nation waxing lyrical.

Although he missed his penalty in the final shootout against Italy, the right-footed winger has had a meteoric rise since leaving the Etihad aged 17.

Playing with the likes of Erling Haaland and fellow Three Lions team-mate Jude Bellingham in the Bundesliga, Sancho racked up 114 goals and assists in 137 appearances for BVB.

It isn't just United fans who are buzzing either, but Lineker too.

The Match of the Day presenter – a show that the south London-born youngster revealed he watched during his four years in Germany to keep up with the English top-flight – tweeted his reaction to the confirmation on Friday.

Despite his pedigree, Ole Gunnar Solskjaer still believes Sancho can now release his "untapped talent" having completed his move from Borussia Dortmund.

"Jadon epitomises the type of player I want to bring to the club, he is a forward player in the best traditions of Manchester United," he told manutd.com.

"He will form an integral part of my squad for years to come and we look forward to seeing him blossom.

"His goals and assists records speak for themselves and he will also bring tremendous pace, flair and creativity to the team."

"Old Trafford will give him the platform he needs to release his untapped talent and perform at the highest level.

The Norweigan also praised his decision to move to Dortmund at such a tender age, saying: "For a player of his age, Jadon has already achieved a great deal and showed the courage to go and prove himself abroad."

Does the signing of Sancho make United title contenders? Comment below.

"We all look forward to welcoming Jadon to the squad as we prepare for the new campaign."

The Red Devils’ second signing of the summer after back-up goalkeeper Tom Heaton arrived on a two-year contract earlier this month, is looking forward to progressing his career at Old Trafford.

"I’ll always be grateful to Dortmund for giving me the opportunity to play first-team football, although I always knew that I would return to England one day," Sancho said.

"The chance to join Manchester United is a dream come true and I just cannot wait to perform in the Premier League.

"This is a young and exciting squad and I know, together, we can develop into something special to bring the success that the fans deserve," the former Watford youth star stated.

"I am looking forward to working with the manager and his coaching team to further develop my game."

Football: Valencia roar back in second half to thrash Lille