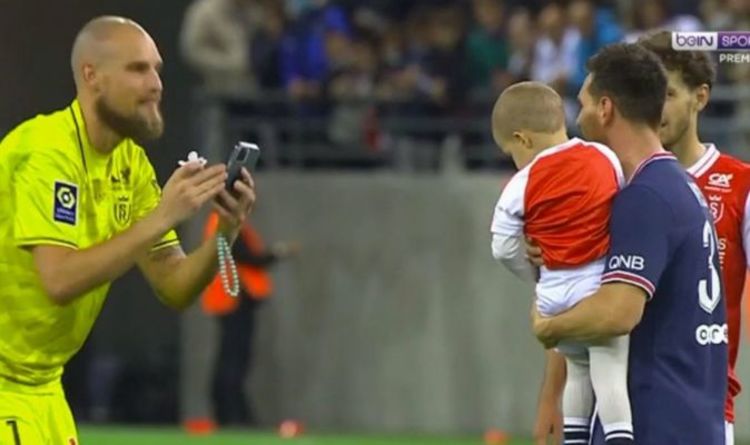 Is Pochettino under huge pressure at PSG after Messi arrival?

Lionel Messi made his Paris Saint-Germain bow tonight at Reims, replacing Neymar in the second-half of Mauricio Pochettino’s side’s 2-0 victory on the road in Ligue 1. Kylian Mbappe may have been playing his final game for the club but he ensured his signed off in style with a brace in the victory that keeps PSG top with four wins from four.

Mbappe’s potential departure is one of just several mind-boggling elements to tonight’s story and he may only get to share the pitch with Messi as his team mate for around 25 minutes.

That would be a sad story given these are two of the world’s best talents on display but Mbappe has dreams to fulfil with Real Madrid.

Nonetheless, this was a night for the ages and it will take time to get used to seeing Messi play in the blue of PSG.

Express Sport has delved into three particular moments that helped capture the craziness of the Argentine’s box-office free transfer to France.

Reims goalkeeper Predrag Rajkovic spent the final quarter of the game desperately trying to keep Messi at bay but come full-time, he was a fan like those in the stands.

He asked his opponent to pose with his son after the game and of course, Messi obliged.

During his time at Barcelona, a video of Messi and the son of Andres Guardado went viral after the Real Betis midfielder also asked for a picture with his little one.

Messi’s humility stands out immediately and his kindness is just one of several reasons why he is adored across the globe.

You get the sense more photos will follow. Mbappe, Neymar aren’t asked but Messi is the definition of a sporting mega-star.

Whack in the face

It was a difficult watch in truth, seeing Messi trying to navigate his way through a scrappy, physical game that really lacked quality.

This was a natch that was starved of technical brilliance and the ball was often bouncing and bobbling around.

Yet when Messi got on the ball, you got the sense something could happen.

He was soon given a welcome to Ligue 1, taking a clump round the side of the face.

Although not every match will be like this and it would be wrong to judge too soon, but La Liga is evidently Messi’s home and the style of football in Spain is much easier on the eye.

Neymar has been delighted to reunite with his close friend Messi in Paris but now he may have realised his game time could take a hit.

He was subbed off for his former Barcelona team-mate in the second half and his face painted a picture while sat on the bench.

Cramming Messi, Neymar, Mbappe and Angel Di Maria into the same team could prove difficult for Pochettino, although the Frenchman could be heading for the door.

Nonetheless, Neymar will feel as though his place in the team should never come under threat.