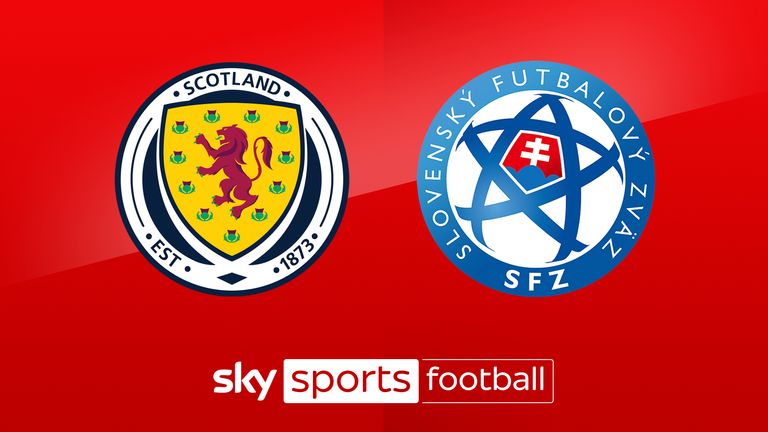 Team news and stats ahead of Scotland vs Slovakia in the Nations League live on Sky Sports (kick-off 7.45pm).

Steve Clarke’s Scotland side overcame the late disruption of player withdrawals to set up a Euro 2020 play-off final against Serbia next month after winning the national team’s first-ever penalty shootout following their first extra-time in almost five decades.

And with Hampden Park games to follow on Sunday against Slovakia and the Czechs three days later, Clarke hopes to ease the burden on his players.

The victory over Israel was tense and tight, with Scotland having the better of the scarce chances but Israel also enjoying some decent spells of possession.

Scotland have added uncapped defenders Andy Considine and Paul McGinn to their squad for the Nations League double-header against Slovakia and Czech Republic.

The pair have been called up after national team manager Steve Clarke suffered six withdrawals in the build-up to Thursday’s Euro 2020 play-off semi-final penalty shootout win against Israel.

Considine, 33, is a former U21 international who has spent his entire club career with Aberdeen. Hibernian full-back McGinn, 29, joins his brother, Aston Villa midfielder John McGinn, in the squad.

Andy Considine and Paul McGinn will join up with the squad for our UEFA #NationsLeague matches against Slovakia and Czech Republic. pic.twitter.com/6UVorbR7ta

Clarke’s initial 26-man selection was severely hit by coronavirus issues and injuries earlier in the week.

Kieran Tierney and Ryan Christie were both ordered to self-isolate after Stuart Armstrong tested positive for Covid-19, while forward Oliver Burke and defenders Scott McKenna and Liam Palmer all pulled out injured.

Slovakia have likewise been hard hit by coronavirus cases with Inter Milan defender Milan Skriniar pulling out of the squad last week after a positive test.

Pavel Hapal is expected to rotate at Hampden Park following the penalty shootout victory over Republic of Ireland in the European Qualifying semi-final play-off.

Robert Mak and Lukas Haraslin are among those in contention to return to the starting XI after finding themselves on the bench in midweek.

Scotland vs Slovakia will be broadcast live on Sky Sports Main Event from 7.30pm; Kick-off at 7.45pm. Sky Sports customers can watch in-game goals in the live match blog on the Sky Sports website and app. Highlights will also be published on the Sky Sports digital platforms and the Sky Sports Football YouTube channel shortly after the final whistle.

What the manager said

“It was a big effort over 120 minutes for a lot of the players and it’s going to be almost impossible for them to play the next two games, a full 90 minutes.

“There is a little bit of thinking to do for the coaches and hopefully we come up with the right formation for the next two games.”

“We are trying to build something, and I think people maybe underestimate that a bit.

James Tedesco cleared for Game I of State of Origin series
We and our partners use cookies on this site to improve our service, perform analytics, personalize advertising, measure advertising performance, and remember website preferences.Ok