Liverpool comfortably saw off Leicester 3-0 at Anfield despite the absence of several key men.

The Foxes have been in impressive form lately and had been tipped to run the Reds close.

Brendan Rodgers, returning to Merseyside, could've seen his side go back to the top with a win.

But the defending Premier League champions were in control from early on and took the lead when Jonny Evans headed into his own net from a corner.

Diogo Jota then doubled their advantage shortly before the break when he nodded home from Andy Robertson's cross.

The Reds continued to control the game in the second-half and Roberto Firmino made it 3-0 late in the game when he scored from a corner.

Did not ned anything spectacular but was always immaculately positioned

Made a couple of crucial interventions but defending last his limit

Booked. Managed to make a few forward runs and harshly booked for foul on Milner

Booked. Found it tough going but did manage to nick possession now and again

Was mainly restricted to defensive work which he carried out well

Kicking himself for missing a gilt-edged chance after Liverpool opener

MAN OF THE MATCH: Diogo Jota 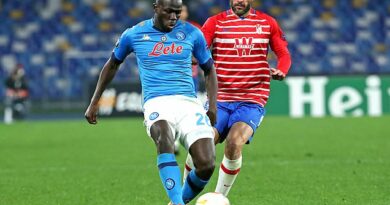 Arsenal and Chelsea ‘prepared for transfer battle’ over Samuel Umtiti