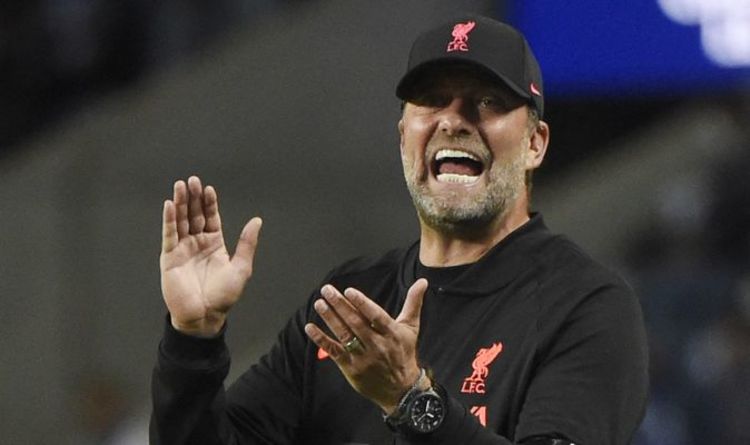 Liverpool boss Jurgen Klopp is wary that Manchester City will be looking to “strike back” after Lionel Messi helped Paris Saint-Germain defeat Pep Guardiola’s side on Tuesday. The Reds bounced back from their 3-3 draw with Brentford at the weekend with a strong performance against Porto.

Klopp was forced into one change from the match at Brentford with James Milner coming in for the injured Trent Alexander-Arnold.

But that made little difference to Liverpool going forward as they enjoyed yet another fruitful evening in front of goal away at Porto.

Mohamed Salah and Roberto Firmino scored two each with Sadio Mane also getting on the scoresheet.

A consolation goal from Mehdi Taremi proved to be the only blip of the evening for Liverpool as they lost their clean sheet.

JUST IN: Liverpool’s unsung hero vs Porto would be valued at Man City, Chelsea

But Klopp was left delighted with his side’s performance, which has seen Liverpool hold on to top spot in their group with six points from two games.

“First and foremost the most important thing is the result. It is a massive one away at Porto. Winning, and the way we won, makes it better,” Klopp said.

“It was good in lots of moments. We could see Porto watched our last game at Brentford. They started direct. I wanted to get it sorted on the pitch and that’s what we did step-by-step.

“We scored maybe not the most amazing goals but important ones in the first half. In the second-half we controlled the game. Porto had massive problems. One centre-half out with a red card and the other, Pepe, not being able to play before the game. We could use that.

“We played wonderful football between the lines, we lost the ball in a situation we should not have. Defensively we played a super game. Goals happen so I am not too concerned.”

But it wasn’t the perfect evening for English clubs as City were beaten 2-0 by PSG with Lionel Messi bagging his first goal since leaving Barcelona.

It’s also the first time City have lost in the group stages of a Champions League since 2018.

City’s next match is away at Anfield on Sunday with Liverpool coming into the fixture high on confidence.

Pep Guardiola was relatively muted when asked about how City’s defeat to PSG affects their preparations to face Liverpool.

However, Klopp suggests that PSG beating City doesn’t actually help Liverpool ahead of this weekend’s game.

When asked whether Liverpool have good momentum heading into the game against City, Klopp said: “It always helps, but against City it doesn’t help alone.

“We need much more things than only momentum and we need to play better than we did tonight.

“But that’s clear anyway so will be a completely different game.

“I only heard now the result obviously from the PSG-City game so City will want to strike back for sure.

“But we are at home finally after a few games without our crowd so lets give it a go.”