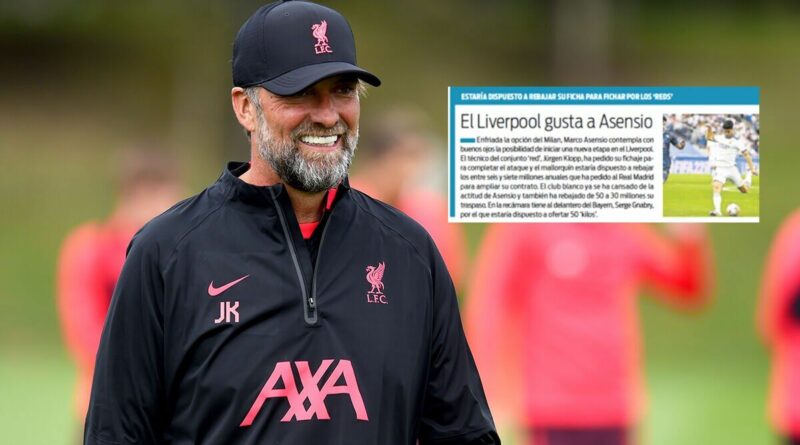 Liverpool boss Jurgen Klopp has reportedly requested the signing of Real Madrid star Marco Asensio. The Spain international’s price tag has been reduced to £25.7million due to his contract at the Bernabeu expiring at the end of next season.

Liverpool have already made a major addition in attack this summer. The Reds completed the signing of Darwin Nunez last month in a deal that will rise to a club-record £85m.

However, Sadio Mane’s exit from Anfield has left a big hole. Mane joined Bayern Munich in June, ending a glittering spell at Anfield.

And Klopp appears keen to add further attacking talent to his squad, with Takumi Minamino also having left for Monaco.. Spanish outlet Sport claims the German has asked for the signing of Asensio. 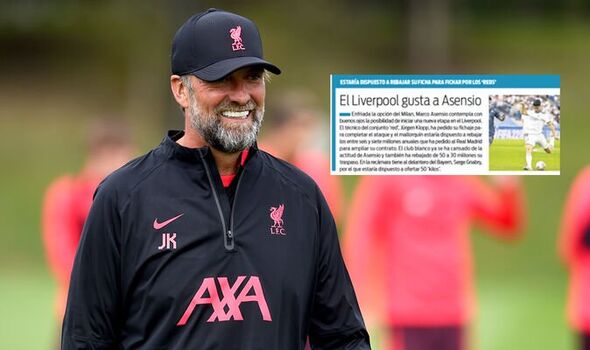 The player would be keen on a move to Merseyside after eight years in Madrid. The report claims he is willing to lower his wage demands after previously asking Real for between £5.1m and £6m net per season to sign a new deal.

It appears Real are happy to sell after reducing their asking price from £42.8m to £25.7m. AC Milan were keen on signing Asensio but have since cooled their interest.

Asensio’s arrival would bolster an already well-stocked group of attackers at Liverpool. Mohamed Salah’s decision to sign a new contract last week was a huge bonus to the Reds.

Luis Diaz joined in January and will help soften the blow of losing Mane after a fine first six months for the Colombian in the Premier League. Diogo Jota and Roberto Firmino are the two alternative options to new signing Nunez as the central striker of the front three. 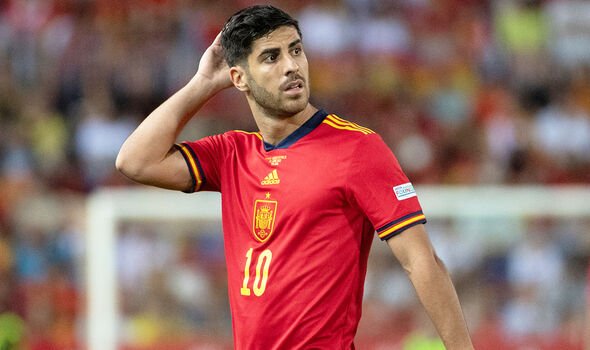 Asensio played the majority of last season as a right-sided attacker under Carlo Ancelotti but can also operate off the left. He netted 10 goals despite making just 19 starts in La Liga.

The 26-year-old was an unused substitute as Real ran out winners over Liverpool in the Champions League final in Paris in May. Asensio joined Real from Mallorca in 2014 and has made over 200 appearances for the club.

His 10 league goals last term was his best return in a single campaign. Asensio has won three La Liga titles and three Champions Leagues as a Real player.