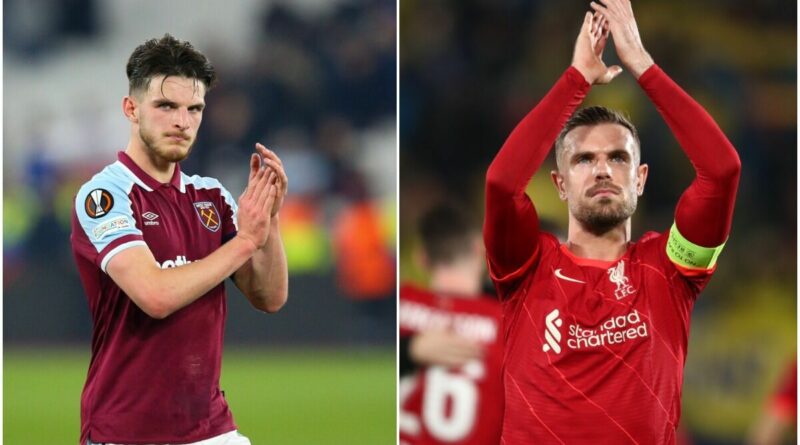 Declan Rice would be the perfect player for Liverpool to sign as a replacement for Jordan Henderson if they can afford the West Ham star. That is the opinion of former Reds midfielder Danny Murphy, who knows more than most about what it takes to succeed at Anfield after spending seven years with the Merseyside club between 1997 and 2004.

Henderson has been a loyal servant to the club since his £20million move in 2011 from Sunderland, but with the England international turning 32 in June, Jurgen Klopp will have to start thinking about signing a long-term replacement.

When asked for his preferred signing, Murphy replied: ”Declan Rice for me, 100%. I think if you’re looking for a Jordan Henderson replacement, then you need somebody who could be there for the next 10 years.”

The likes of Borussia Dortmund starlet Jude Bellingham and AS Monaco enforcer Aurelien Tchouameni have also been linked with a possible switch to join the Premier League side this summer. But Murphy, now working as a pundit, was adamant in his assessment that Hammers skipper Rice would be an ideal addition above the rest of their reported targets.

“Rice is a super athlete; he can get box-to-box like Henderson and he leads others around him,” he said, speaking to Anfield Watch on behalf of Punters’ Page. “He doesn’t have to play the holding role, but he could if Fabinho got injured, and I think he could become a great number eight in a better side. He’ll be able to get forward more and score goals which he has shown at times.”

Rice has a contract that runs until 2024 with West Ham but his immediate future remains unclear after the east London side were knocked out of the Europa League after a semi-final defeat to Eintracht Frankfurt. The England midfielder has long been tipped to move to a bigger club, with Chelsea and Manchester United linked, but David Moyes insists he will not leave for less than £100m.

Murphy believes that while Rice would be a superb signing, such a price tag would rule out Liverpool of the running for his signature. “I know he’ll be really expensive, and Liverpool won’t pay that sort of money,” he added.

“But if you’re asking me from a fan’s mindset and a pundit mindset, then if Liverpool were to only sign Declan Rice it would be a phenomenal signing. But as I say, I think it would be unlikely.”

Rice’s exorbitant price tag could put off potential suitors in addition to Liverpool and the 23-year-old indicated after taking part in the defeat in Germany on Thursday that he could stick around for future European adventures at the London Stadium.

”It is a real gutter because I have got to listen to them celebrate, it is not nice, but we will be back,” he told BT Sport. “I am young, I want more. The lads want more. This club deserves more. We have shown as a club we can do these big European nights.”