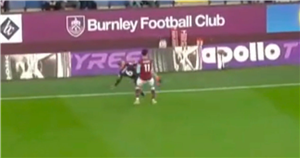 Liverpool fans have spotted an 'absolutely outrageous' moment from Thiago Alcantara in their win over Burnley on Wednesday night.

It puts the Anfield outfit into the top four, leapfrogging Leicester into a Champions League spot.

With one match to go against Crystal Palace, Jurgen Klopp's side are favourites to clinch fourth after a difficult season.

There have been a multitude of injury problems, not least to summer signing Thiago – who has seen his playing time affected in the Premier League.

But the Spaniard was in top form against the Clarets, producing one mesmerising piece of skill that bamboozled Dwight McNeil. With the ball seemingly going out of play, the Spaniard attempted an audacious touch to stop it from being a throw-in.

Against all the laws of physics, the ball spun behind him and left a chasing McNeil visibily confused over what had just happened.

And to add a tad more spice, there was a further piece of skill to protect the ball before passing back to Trent Alexander-Arnold.

Fans were left in awe of the former Bayern Munich star, with one saying: "Thought this was absolutely outrageous."

Another wrote: "Pure filth. Guessing that McNeil had no idea what planet he was on at that point."

"It’s a crime there was no close up replay of this," a third replied.

And this fan said: "If Phil Foden did this Sky would devote an entire 30 minute segment to it."

While another posted: "I lost it when I saw that. Just gonna start calling the man Ragu Alcantara because he just oozes sauce."

Liverpool’s win means that their fate is in their own hands as they end the season at Anfield in front of their fans for the first time this year.

"Today was a semi-final," Klopp said. "We had to win the semi-final and we did.

"Nothing is decided yet but we improved our position and we have the final. That's what we needed. It's what we deserve because this was a top performance.

"Now we have to make sure we recover quickly. We have a thin squad in some positions. We have to wrap them in cotton wool.

Fabregas defends Man United after Baptista claims they were ‘lucky’