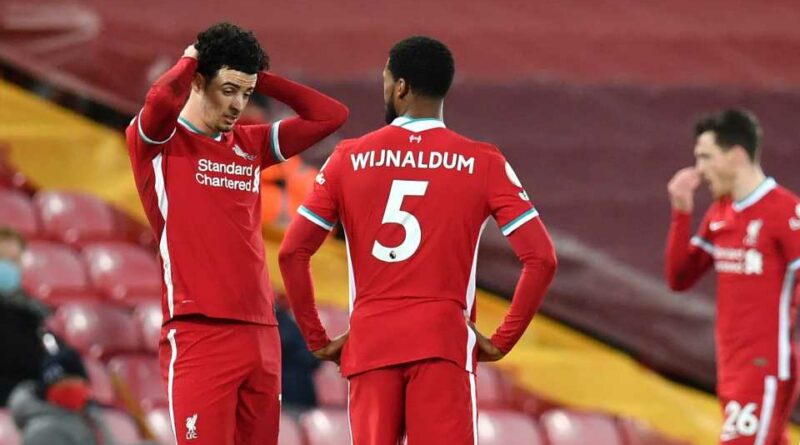 Liverpool’s 2-0 Merseyside derby defeat to Everton has brought the club to a 98-year low, with the Reds suffering four successive league reversals at Anfield for the first time since 1923.

The Reds have seen the wheels come off their 2020-21 Premier League campaign in spectacular fashion, with the defending champions hitting a serious slump.

Jurgen Klopp’s woes continued against their archrival on Saturday, with Richarlison and Gylfi Sigurdsson netting for the Toffees, and the German must now reflect on a sorry home run that is Liverpool’s worst in almost a century.

When did Liverpool last endure such a run?

You have to turn the clock back to 1923 to find the last time the Reds came unstuck in four straight league games in their own backyard.

Back then, with fixtures coming thick and fast, Liverpool found themselves on the wrong end of results against Aston Villa, Sheffield United, Cardiff and Newcastle.

The last of those setbacks 98 years ago came on Christmas Day, with the men from Merseyside also in action on Boxing Day and again on Dec. 29.

They got back to winning ways that day against West Ham, before going on to finish 12th.

When did Liverpool last lose four straight games in the Premier League?

The Reds have been models of consistency throughout Klopp’s reign, with it rare for them to endure such dips.

Having already been downed by Brighton, Manchester City and Leicester in their last three Premier League games, they have now lost four in a row for the first time in top-flight competition since 2002.

Everton will be reveling in the fact that it was the one to push its archrival a little deeper into the mire, with the Toffees savoring their first win at Anfield since 1999 while also bringing a 23-game winless run in all competitions against their neighbors from across Stanley Park to a close.

Klopp’s side had been rock solid on home soil prior to hitting its recent wobble.

A 1-0 defeat to Burnley on January 21 was its first in the league at Anfield in 68 outings, a sequence stretching back to April 2017.

The Reds have now failed to take three points from a home game since Dec. 16, when they saw off Jose Mourinho’s Tottenham 2-1.

Klopp has already thrown in the towel on the club’s title defense, with Liverpool the first champion to suffer four straight defeats since Everton in the late 1920s, and securing a top-four finish now represents the height of the Reds’ domestic ambition as they slip further off the pace being set by Manchester City at the summit.

Liverpool’s next outing at Anfield will come against Chelsea on March 4, with things not about to get any easier for an out-of-sorts side.