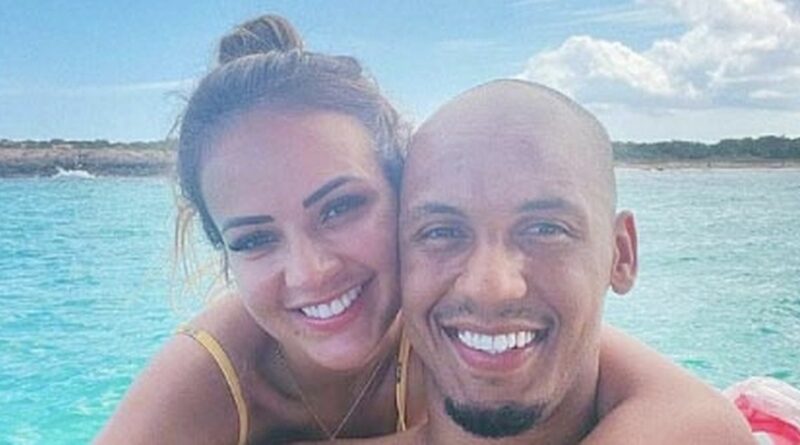 Liverpool star Fabinho has revealed he has to tell stunning wife Rebeca Tavares off for her over-enthusiastic social media activity.

The Brazilian has become a fan favourite at Anfield since making the switch from Monaco back in 2018, with the 28-year-old having established himself as a mainstay at the heart of Jurgen Klopp's midfield. But while Fabinho has made his mark on the pitch, his gorgeous partner has made quite the impression off it.

Brunette beauty Tavares has become a hugely popular figure among the Reds' fanbase – and not just because of her dazzling looks. The 27-year-old has won over the hearts of Liverpool's faithful with her passionate posts about the club – posts which Fabinho himself reveals he knows little about and often has to warn her over.

When probed over his wife's frequent social media activity, which often sees her engaging with Reds' supporters on Twitter, a laughing Fabinho told The Athletic: “I’ve heard about this. I’m not into Twitter too much, it’s not for me, but sometimes I’ll hear that she’s posted something. I always say, ‘Rebeca, just be careful what you’re posting!’.

“I’m not on there so I don’t see most of it. But the fans seem to love her so it’s all good. She loves coming to the games and sometimes when I go home we’ll talk about what happened on the pitch.

"Sometimes I’ll ask her what she thought about the game and whether she thought I played well. But she always says I played good! I don’t think she’s impartial.

Do you think Rebeca Tavares should continue to interact with Liverpool fans on Twitter? Let us know in the comments section below.

“Sometimes I can tell by the look on her face that maybe it wasn’t so good. She knows me so well. She knows that sometimes I’m angry and don’t want to talk about the game and she always respects that.”

Fabinho has already racked up 170 appearances for the Reds and his efforts on the pitch have been integral to helping Liverpool claim Champions League and Premier League triumphs in recent seasons. Having become a global superstar in one of the best teams in world football, the midfielder acknowledges that his religious belief help him and his family stay grounded and maintain a sense of perspective.

"My faith has always been very important for me,” he added. “It’s the same for all my family and my wife too. I always try to do what I do normally. It’s the way my mother and my father raised me.

"I am sitting here today because of God working in my life. I always try to be very thankful for this. I always try to do my best on the pitch and make the most of the opportunities that I’ve been given.”

A talented footballer in her own right, Tavares carved out a successful career over in Spain, the country she moved to from Brazil back when she was just six years old. The bombshell also spent time with Monaco's Women having joined her husband Fabinho in the principality back in January of 2018.

Tavares then hung up her boots following Fabinho's transfer to Liverpool for an initial £39.3million in the summer of that year. The pair wed back in 2015 and are now expecting their first child in January – a boy, who they have already decided will be named Israel.

“It will be nice to have a little Scouser. We’re really happy about that,” Fabinho said. "We’re excited. It’s really nice. People keep telling me that it’s going to change my life.

“The boys are saying, ‘Enjoy sleeping well, enjoy playing a lot of PlayStation, because everything will change when the baby arrives!’ They’re all really happy for me. I know if I need any advice I can go to them. Bobby (Firmino) has three kids, Ali (Alisson) has three as well so I know I can ask them for some tips.

“It will be a new challenge for me and Rebeca. A little Scouser. I hope the other members of my family will be able to understand him when he talks!”

Vorskla Poltava vs Arsenal: Gunners warned venue switch will be a ‘major inconvenience’ to fans and club