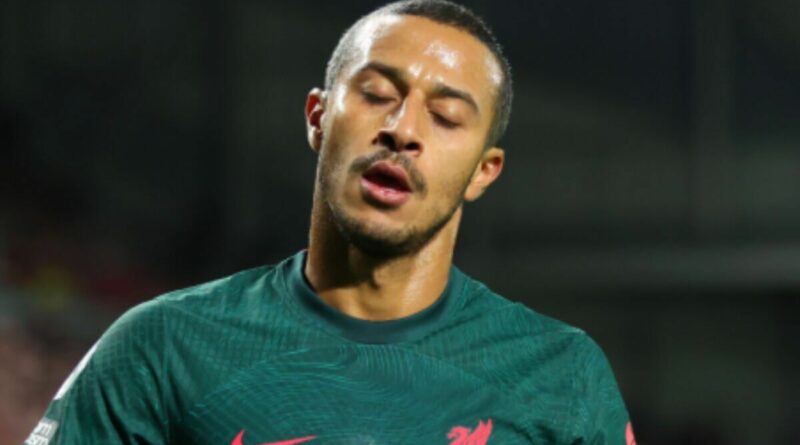 Liverpool star Thiago has been slammed for his performance as Jurgen Klopp’s side lost 3-1 to Brentford, as the Spanish playmaker was told that he “belongs in Masters Football” and that the Reds needed to invest in the middle of the pitch. Liverpool’s midfield has struggled amid calls for the club to push forward and sign England World Cup star Jude Bellingham, following a frustrating defeat away to the Bees on Monday.

Thiago started alongside Fabinho and Harvey Elliott, though the teenager was brought off at half-time for Naby Keita as Klopp was unimpressed with the first-half performance. The German coach was not the only one dismayed with Liverpool’s performance, as former Aston Villa striker Gabby Agbonlahor slammed Thiago and several of his team-mates.

“I’m watching Thiago against Brentford, it looks like he belongs in Masters Football,” Agbonlahor told Football Insider. “He was strolling around. Being good on the ball isn’t enough – you will get ran over in this league.

“[Jordan] Henderson can still do it on occasions, but he’s been poor in recent games. Fabinho can’t really run. Keita, [Alex Oxlade-]Chamberlain, Elliott – they’re good players, but just look at some of the other teams. They need Bellingham. They need two top midfielders who can stretch the game and play box-to-box. [Jamie] Carragher is spot on – they need to spend £200m on that midfield now.”

Masters Football was a six-a-side indoor football tournament shown on Sky Sports that featured retired stars from the likes of Liverpool, Manchester United and Rangers before the show was axed in 2011. The games were played at a much slower pace than average Premier League fixtures and are focused on technical quality as opposed to physical prowess.

Though Thiago was instead turning out for Liverpool, where after the game Carragher explained that the club’s owners Fenway Sports Group needed to invest £200m on three new midfielders for Klopp. “When you look at the age profile of a lot of the players within the squad, they’ve got a lot of players either in their 30s or coming into their 30s who’ve been great for the club,” he said on Sky Sports.

“But I think that is one of the reasons why the ownership is up for sale, or they’re looking for investment, because Liverpool are going to need to go big in the summer. You think what Chelsea and Manchester United spent in the summer, and they’re still not close to winning the title, so it shows you the kind of funds that you need to compete at the top of the league.

“Liverpool year in, year out have sort of sold someone and bought someone, but I think this is a case of now Liverpool need to spend about £200million.

“I’m not saying that in terms of that’s the secret to success, because there’s been lots of teams who have spent lots of money and it doesn’t necessarily work, but Liverpool need to sign three midfield players, I would say.”