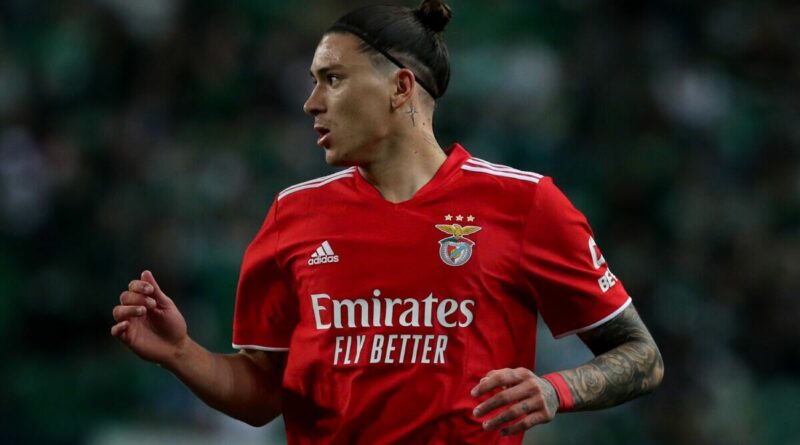 Liverpool have reportedly struck a ‘total agreement’ to seal an £85.5million swoop for 22-year-old Benfica ace Darwin Nunez. The striker is a top target for Liverpool and is expected to head to Anfield this summer after a sublime season in Portugal.

Liverpool are set to lose star forward Sadio Mane this summer, while the future of Mohamed Salah is also up in the air. And Reds boss Jurgen Klopp has clearly turned his attentions to bolstering his attack as he goes in search of Nunez’s signature.

Nunez bagged an incredible 34 goals in 41 appearances last season, with two of those strikes coming against the Merseyside outfit in the Champions League quarter-finals. And, according to Portuguese publication Record, the Reds are set to land him after agreeing to pay Benfica £68.5m upfront with a further £17m in add-ons, of which £8.5m are said to be ‘easily attainable’.

Nunez will sign a five-year deal to join the Reds and will overtake Virgil van Dijk as the club’s record signing if those attainable add-ons are paid. Van Dijk joined Liverpool at the start of 2017 for £75m.

Klopp was full of praise for Nunez after seeing the Uruguayan torment his defence in Europe at the start of April. “He’s a very good boy,” the German said. “I knew him before, of course, but he played well against us. He is strong physically, fast, calm at the finish. That’s great. If he avoids injuries, he will have a great career.”

Nunez, who has been capped 10 times by Uruguay, then suggested he would consider moving on this summer after revealing he was committed to his current club only until the end of the last campaign. “What the Liverpool manager said about me is a compliment, but my head is totally at Benfica until the end of the season,” the player said after hearing Klopp’s comments.

A whole host of clubs have been chasing the signature of Nunez, with Manchester United, Real Madrid and Paris Saint-Germain also reportedly keen to land him. But his future appears to lie at Anfield – and he will be hoping he can fire the Reds to success in England and Europe.

Liverpool enjoyed a fine campaign last time around but fell agonisingly short of claiming Premier League and Champions League silverware. The Reds finished just one point behind top-flight champions Manchester City, before losing 1-0 to Real Madrid in the European final.

But if Klopp can complete his Nunez deal, he will be confident his team can hit the next level when the new season gets underway.

The Insider: Why Chelsea need another legend like John Terry on their staff

Manchester United 'may have to settle for Sergio Reguilon loan deal'