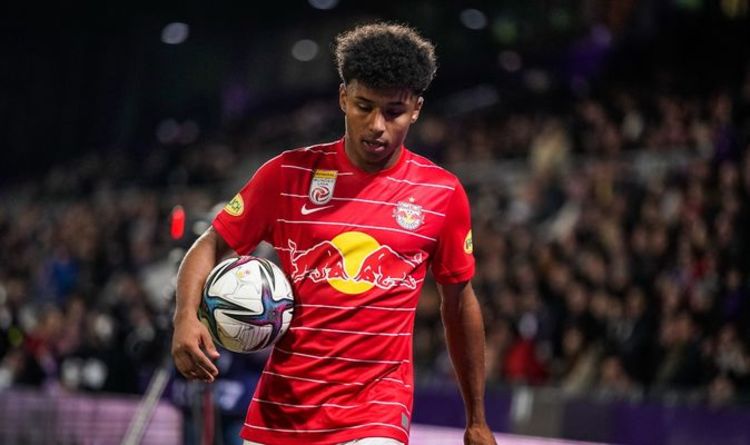 Liverpool have been dealt a blow in their pursuit of striking target Karim Adeyemi, with the striker’s agent reportedly using his contacts to facilitate a potential switch to Barcelona.

Adeyemi has captured the attention of a host of Europe’s top clubs with his goalscoring exploits for RB Salzburg in the Austrian Bundesliga over the past few months.

The 19-year-old has notched 11 goals in just 13 league games this season and has been courted by a number of interested clubs.

Jurgen Klopp has been a long-term admirer of the teenage hotshot, who is the perfect profile to bolster an ageing Reds frontline.

But reports have now emerged indicating that Adeyemi’s agent, Manni Schwabl, has opened talks with Barcelona – which could hamper Liverpool’s hopes of luring the German star to the Premier League.

SPORT are reporting that Schwabl was in Barcelona just a few weeks ago for preliminary talks with the Nou Camp hierarchy over a future move for his client.

Competition is likely to be fierce when Adeyemi does move on, with the striker expected to depart Salzburg next summer.

It remains to be seen if Adeyemi would still favour a switch to Anfield regardless of Barcelona’s interest, given that the Catalan giants are in the midst of a huge rebuild job.

The Reds are likely to face competition from teams a bit closer to home, too.

A report by Calciomercato claims that Chelsea have attempted to steal a march on their rivals by also opening talks with Adeyemi’s advisors over a future switch to Stamford Bridge.

The Blues splashed out a whopping £97.5million on Romelu Lukaku this summer but are seemingly still in the market for attacking reinforcements.

Although Adeyemi isn’t likely to cost anywhere near that sum, both Liverpool and Chelsea are unlikely to encounter an issue financially in prising the forward away from Salzburg; although the same can’t be said for cash-strapped Barca.

The report from SPORT goes on to outline that, despite Schwabl’s contacts at Barcelona and Liverpool’s continued interest, the majority of Adeyemi’s team-mates expect the youngster to follow in the footsteps of Erling Haaland by sealing a move to Borussia Dortmund next summer.

Haaland has evolved into one of Europe’s most coveted strikers in under two years since he made the jump from Salzburg to the Bundesliga.

Following a similar path to Haaland could be enticing enough for Adeyemi to spurn a potential move abroad – and leave both Liverpool and Barcelona bitterly disappointed.