Liverpool saw off Arsenal at Anfield to make it three wins from three at the start of the season as they bid to retain their Premier League crown.

The Gunners took the lead through Alexandre Lacazette’s opportunistic first-half strike very much against the run of play, but were overwhelmed by Liverpool as the game wore on.

Here’s how the players rated:

Alisson Becker, 5: Had little to do beyond Alexandre Lacazette’s goal, for which he put up unusually weak resistance.

Joe Gomez, 6: Solid and reliable by the young centre-half.

Andrew Robertson, 7: Made amends for his major error in the build-up to Arsenal’s goal with a strike of his own at the other end.

Fabinho, 7: Kept things simple in midfield in a faultless display.

Naby Keita, 7: One of his sharpest performances in a Liverpool shirt yet, sucking defenders towards him in the build-up to Liverpool’s first goal.

Mohamed Salah, 7: Not at his very best but a constant menace who play a key role in the equaliser.

Roberto Firmino, 6: A quieter game from the No9, though he worked hard off the ball.

Sadio Mane, 7: Lively in and around the box and reacted well to score Liverpool’s equaliser.

Bernd Leno, 4: Parried Salah’s shot weakly into the path of Mane for Liverpool’s equaliser and failed to show authority in his area.

Maitland-Niles, 4: Didn’t influence the game with quality going forwards and was rushed into playing inaccurate passes under pressure. Struggled to provide Kierney with enough cover to stem Salah.

Tierney, 4: Toiled to combat Salah’s pace but was badly beaten by the Egyptian for Liverpool’s equaliser.

Luiz, 6: Was relatively assured in the centre of Arsenal’s back three, but was always fighting a losing battle with Arsenal conceding so much possession.

Holding, 5: Caught on the ball a couple of times playing out from the back, but handled himself relatively well otherwise on a difficult evening.

Bellerin, 4: Consistently found it difficult to contain Robertson and Mane, and rarely managed to link play out from the back as Liverpool’s forwards applied overwhelming pressure.

Elneny, 6: A rare bright spark in the centre of midfield for the Gunners, dynamic in the press and prepared to get stuck in. Offered little going forwards, though.

Xhaka, 5: Was a peripheral figure as Liverpool dominated. Made a few splitting passes, but was largely consigned to defending deep until he was replaced by Dani Ceballos.

Aubameyang, 5: Was unable to make his mark on the game, largely nullified by having to track back as Arsenal struggled to maintain possession.

Lacazette, 5: Capitalised on Robertson’s error to score the first goal with a miscued shot but missed a brilliant chance to equalise in the second half.

Willian, 5: Tracked back well in defence but didn’t have any impact going forwards. 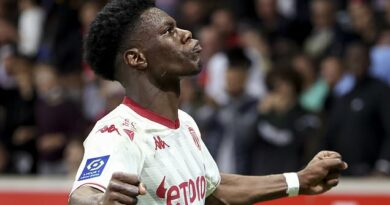 Madrid 'race to sign Aurelien Tchouameni' after missing out on Mbappe 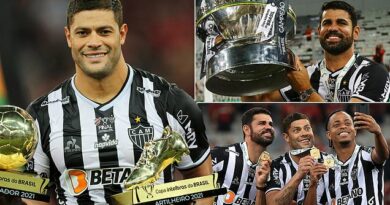 Jurgen Klopp: ‘You could write books about Liverpool squad’s resilience’