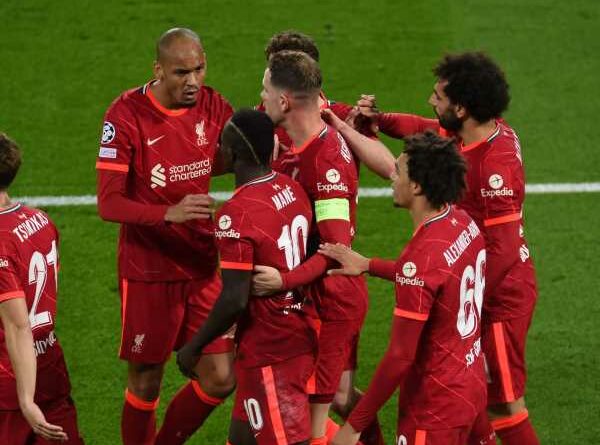 Liverpool secured their progress to the knockout stages of the Champions League with a commanding win over an ill-disciplined Atletico Madrid side at Anfield.

The Spanish champions were reduced to 10 men before half time when Felipe was shown a straight red card for a cynical foul on Mane, although the fact the Brazilian defender appeared to ignore referee Danny Makkelie following the foul seemed to do him no favours.

Here are five things we learned as Liverpool secured their place as Group B winners with two games to spare.

Confirmed as group winners with two games to spare – that is a result which leaves Liverpool and Jurgen Klopp in dreamland.

The Reds have had their share of nervy nights in the Champions League in recent seasons when their progress has come down to the last match of the group – think back to those encounters against Napoli and RB Salzburg – but there will be no need for such concerns this time around.

It’s remarkable, really, that Liverpool sit on top of Group B seven points clear and with four wins from four. It has been just as dramatic as previous campaigns, but Liverpool prevailed when it mattered, especially in getting those crucial late goals in the pair of 3-2 wins against AC Milan and Atletico in Madrid.

It’s also worth remembering how challenging a Champions League group this was assumed to be when the draw was made, perhaps the hardest out of the eight, but the Reds have been dominant. This performance, albeit against a ragged and ill-disciplined Atletico Madrid, was the pick of the bunch.

Klopp won’t see the remaining fixtures against Porto at Anfield and Milan in Italy as ‘free weeks’ – but it does give Liverpool the option to rotate their team more than they usually would at a time where fixtures come thick and fast domestically.

Liverpool took the lead thanks to a quite stunning first-time cross from Alexander-Arnold, which reduced the Atletico defenders into statues as Jota headed in, unmarked, at the back post.

The defending from the visitors was questionable, as Simeone’s side also afforded Alexander-Arnold space in the right channel to pick out his cross, but he still had to provide the delivery. Both whipped and flat at the same time, it allowed Jota to head in from a couple of yards and left Jan Oblak stranded.

We’ve become so used to such moments of quality from the right-back that it’s easy to take him for granted. If anything, Alexander-Arnold’s exquisite technique was made even better by the face that Angel Correa had a chance to flash a ball across the face moments earlier, only to sky his delivery when he had team-mates free at the back post.

The second wasn’t so bad either, either, even if whether he meant it or not will be up for debate. The 22-year-old will get the assist for Mane’s goal, too, although it looked as if he was attempting to shoot across Oblak when Mane stole in to add Liverpool’s second – but this was also a performance that was more than numbers and figures.

This was a commanding display from a player with a unique skillset, who dominated his flank in a way that few in the world can replicate at this level.

Suarez has night to forget on Anfield return

If it wasn’t for the boos which followed him around Anfield, it would have been easy to forget that Suarez was on the pitch.

We were, eventually, given a glimpse into the twilight zone in which Suarez scored at Anfield against his former team, only for his deflected volley to be disallowed for a previous offside. Suarez didn’t react or celebrate, the reaction from the Liverpool fans was muted boos, but without full commitment. It rather summed up what was an underwhelming evening for those looking for an entertaining sub-plot.

Suarez’s second return to Anfield since leaving the club in 2014 ended with the same outcome as the Champions League semi-final defeat he had with Barcelona in 2019, and the striker was greeted with the same reception. But there was very little of anything else.

Suarez, who didn’t start the previous fixture but came into the team in place of the suspended Antoine Griezmann, contributed nothing in an attacking sense, even when Atletico were at full strength with 11 players. And even though this was a night that was full of needle, Suarez was barely involved in that either.

The two minutes in which he scored, saw it disallowed, and was substituted, were the extent of his involvement. There were a few more muted boos alongside the general applause, but again without the commitment. It felt as if everyone had moved on.

He didn’t get his goal, but Mohamed Salah also didn’t need one to underline his performance. The Egyptian was ruthlessly sharp against Atletico as he ran Mario Hermoso ragged on the right wing. From the moment Salah skipped around the Spaniard early on and Hermoso was booked, there was only ever going to be one winner in the contest.

With Salah in this type of form, and with Hermoso retreating into his box as if on roller-skates, it looked as if the Liverpool forward was on the verge of scoring another sensational individual goal each time he got the ball in that right channel.

There were sumptuous touches, sublime shimmies and moments which had Anfield on its feet – even without Salah contributing directly to a match-winning moment. It’s a sign of the mood he’s in at the moment, every moment on the ball is an opportunity to express himself.

Perhaps a reason why Suarez’s return was so subdued is that with Salah on this type of form, it would be a waste of energy focusing on what has already gone. Why would Liverpool fans do that, when one of the best forwards to ever play for the club is in this sort of mood right in front of them?

A combination of injuries and rotation presented two Liverpool players chances to start in their biggest match of the season far. It was an opportunity that both Kostas Tsimikas and Alex Oxlade-Chamberlain seemed to grasp with both hands.

Tsimikas came in for Andy Robertson at left-back while Oxlade-Chamberlain started in Liverpool’s midfield, largely due to several injury absentees.

It had arguably been 18 months since Oxlade-Chamberlain’s last eye-catching display in a Liverpool shirt, which came in the Champions League defeat to Atletico Madrid the last time they visited Anfield in March 2020, and although he’s still looking to get back to those heights, this was a positive display.

Tsimikas was even more impressive on his first Champions League start of the season. He brushed off a nervy moment when he conceded a needless corner to provide a cross that was just as good as any created by Alexander-Arnold, but which Jota failed to convert.

Furthermore, Klopp was also boosted by Fabinho’s performance on his return to the line-up. The Brazilian provided some much-needed steel in the Liverpool midfield for a match-up that needed it most, after it has been absent in the second half of Saturday’s 2-2 draw against Brighton. Thiago also returned from the bench in the second half and Klopp will feel his squad is coming together nicely ahead of a crucial time in the season.