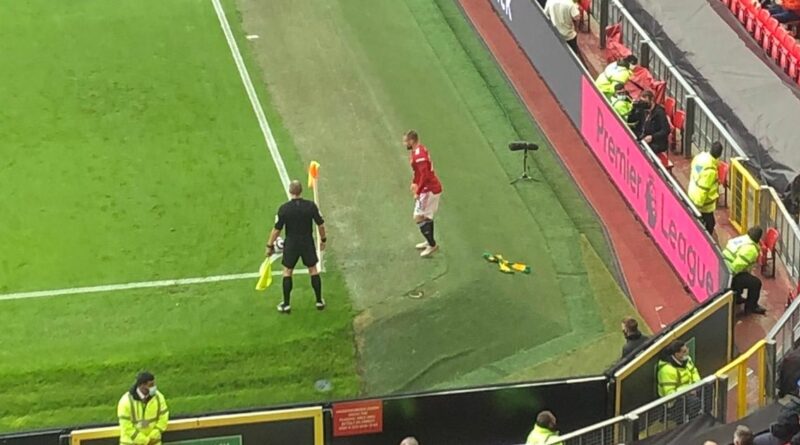 Luke Shaw has responded to a fan who was facing a 'three-year ban' from Old Trafford after he threw a scarf at the full-back on Tuesday evening.

Manchester United drew with Fulham – in their final home game of the season – after Joe Bryan cancelled out Edinson Cavani's 40-yard-screamer late in the second half.

Shaw was taking a corner for United in their Premier League clash when a fan threw a green and gold scarf at the Englishman.

The United supporter was told to leave Old Trafford shortly after, and he was facing a 'three-year ban' from the stadium.

One tweeted: "Lad who threw the green & gold scarf onto Luke Shaw when he was taking the corner got hauled out by the security just after the goal.

"Wouldn’t mind Luke was laughing & so where half the stewards around the pitch it’s not like it was anything that could cause him any harm."

And the culprit responded: "Was thrown to Luke in a good manner. Nothing aggressive.

"[I] was told by the Stewards I’m facing a 3-year ban. All paid up for Gdańsk next week and this looks like it could be the end of the road for me.

"[It] was a peaceful gesture that was taken out of context. Luke Shaw laughed."

Luke Shaw, however, saw the lighter side of it and responded to the fan: "I understand completely, first match back at Old Trafford, emotions are high.

"I know there was nothing aggressive towards what you did. I will try my best to speak with someone and sort it out."