Manchester City boss Pep Guardiola appears confident that Bernardo Silva will make a transfer u-turn and stay at the Etihad Stadium, despite the midfielder pushing for a move away in the summer. Silva scored his side’s opening goal on Saturday as City defeated Burnley 2-0.

The Portugal international has played 211 games for City since arriving at the club in 2017 from Monaco.

The 27-year-old is a regular in Guardiola’s side but expressed his desire to move closer to his native Portugal earlier this year.

City were apparently open to allowing Silva to depart during the transfer window – but rival clubs struggled to meet the club’s high valuation of the player.

Silva has gone on to start all but one of his team’s Premier League and Champions League games this season.

And Guardiola, who was quick to praise Silva’s performance against Burnley, believes the player could now stay put in Manchester.

“We know how we want him, how we love him,” Guardiola said after the match.

“I know there will be lows in this season because it’s impossible to maintain this level throughout the season but I encourage him to be like this because I am pretty sure that playing at this level he will be happier and happier and he will enjoy being here with us.

“But at the same time not just Bernardo. I said many times in my last press conference, I want the best of them.

“They have to be happy to be here to perform well. He is such an important player for us, he can play in four or five different positions and he is so intelligent. And intelligent players can play everywhere.

“There are players who can just play in this [one] position. He is a winger, or a striker, or a holding mifielder or a central defender.

But the player was visibly disappointed after the final whistle after failing to add another strike later in the match when he hesitated in front of goal to try and pick out a team-mate.

“Bernardo is an incredible person and he scored and was like ‘I scored a goal, I am going to give another one for my mate,’” Guardiola added.

“We are incredibly lucky to have him. Only I want is his happiness – this type of person deserves the best.

“It is a joy as a manager to have him with us – he is in his top level right now.” 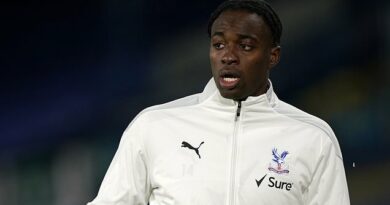