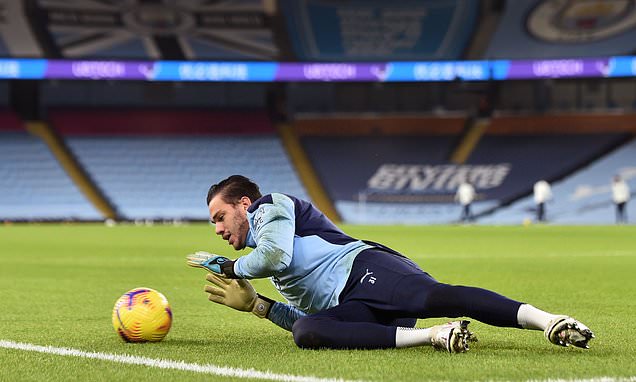 LIVE: Manchester City vs Crystal Palace – Pep Guardiola aiming to close the gap at top of the table with a win, with both teams missing star forwards in Sergio Aguero and Wilfried Zaha

Manchester City will be bidding to make it five Premier League wins in a row when they welcome Crystal Palace to the Etihad this evening.

Pep Guardiola’s side looked to have got their mojo back in recent weeks and are now closing the gap to those who occupy the top three spots in the table.

However, City will be wary of today’s visitors who have been somewhat of a bogey team for them in recent seasons. Roy Hodgson’s side are looking for some consistency in their results, having won just once in the last seven outings, but a win at the Etihad could be the spark they need to get them back in the top half of the table.

Follow Sportsmail for all the live coverage in the north west along with all the build up and team news before the 7.15pm kick-off.

Gabriel Jesus will be determined to make an impact up front for City. Sergio Aguero is again unavailable.

City have won their last four Premier League games in succession and now have an extra incentive going into this game. They will be wary of Palace, however, with Roy Hodgson’s side having managed to take a point from their last game away to Arsenal.

After Liverpool drew 0-0 with Manchester United, a victory for City would take them into second place.

Macclesfield 2-0 Crawley: Sol Campbell off to winning start at home