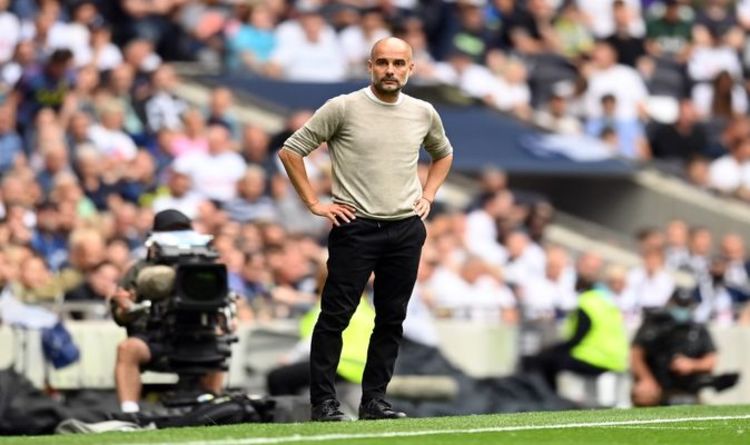 Seldom has the build up to a heavyweight Premier League fixture been so dominated by a player not involved. Harry Kane may well have been at the Tottenham Hotspur stadium, but both teams would have benefitted from him on their side in north London.

City won the league at a canter last season without a regular striker but Pep Guardiola will know the challenge of retaining has intensified with firing Chelsea, Manchester United and Liverpool.

Kane is said to have made it explicitly clear that he desires a move to City but some have suggested the England captain would only be a lavish commodity in the pursuit of further dominance.

And that notion carried weight early on as Ferran Torres led the line with poise and verve in the opening exchanges.

City came out of the blocks in ominous fashion and it was like they’d never been away. Torres, Riyad Mahrez and £100m man Jack Grealish all threatened and Hugo Lloris looked flustered.

JUST IN: Liverpool plot transfer trick to sign Kylian Mbappe for free in 2022

But Guardiola’s side were vulnerable to the counter attack and troubled Benjamin Mendy was targeted on a torrid afternoon.

The control Guardiola so craves was soon lost and they did not have that man with goalscoring instinct to turn towards.

Heung-min Son did not miss his partner in crime and curled the ball beyond two City defenders as one of countless counters was capitalised on ten minutes after the break. No Kane? No problem.

Steven Bergwijn was bright and Lucas Moura adventurous as Nuno Espirito Santo’s plan had been deployed to perfection.

Torres scuffed a shot from six yards out and you wouldn’t have been alone in wondering if the proficient Kane would have adjusted to score had he been in sky blue.

“Pep Guardiola is trying to buy Harry Kane from Spurs. Does he think he maybe got away with it last year and doesn’t think he can get away with it again without an obvious no. 9?,” Graeme Souness speculated before kick off.

City were lacking a killer instinct and perhaps their pursuit of the Premier League’s best striker will now intensify.

Kane has spoken about his love of Kevin de Bruyne but not even the Belgian maestro could stop another defeat after his arrival in the Tottenham Hotspur Stadium.

Guardiola’s record in Spurs’ new home is almost unthinkable, with City now without a goal in four defeats in four visits.

The Spaniard won’t panic in the knowledge his City team will almost certainly be back at their best.

But he is aware that he isn’t able to ‘get away’ without a prominent no.9 this season and talk of a transfer for Kane won’t go away.

Everton vs Man City live stream: How to watch Premier League fixture online and on TV