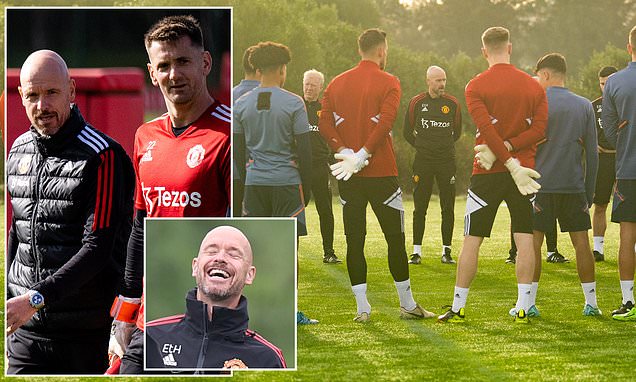 United’s stars know the consequences if they cross the line with Ten Hag after Marcus Rashford became the latest player to be punished last month when he was dropped for the win at Wolves for oversleeping and missing a team meeting.

Heaton, 36, is part of a leadership group of United players set up by Ten Hag to enforce a strict code of conduct, and the former England international believes it is having an effect on the pitch following a run of 11 wins in 12 games. 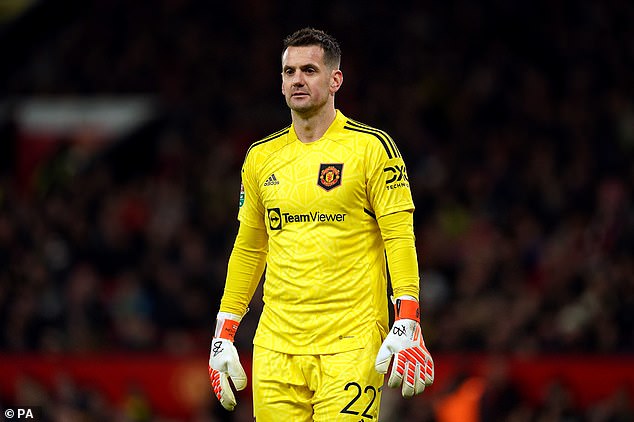 ‘My personal view is that I think that really does make a difference,’ said Heaton. ‘When there is a consequence to players, a discipline, you know not to cross the line. If you do, you’ll be out.

‘He has brought a clear messaging, clear lines of what’s acceptable and what’s not. Responsibility on everyone, the professional side of it, and when you cross it, he’s there to put you back in your place.

‘I think Marcus’s response in that (Wolves) game was absolutely incredible. That’s the sort of thing it generates when it’s all moving that direction. So for me, yes, it does translate onto the pitch.

‘We’ve got a really good atmosphere in the dressing-room, we’ve got some great characters in there – a good, tight unit. It’s been improving throughout my time here.

‘There are some incredibly talented footballers in there, but they’re all people at the end of the day and I think we all need a quiet word here and there, or a strong word depending on the scenario. 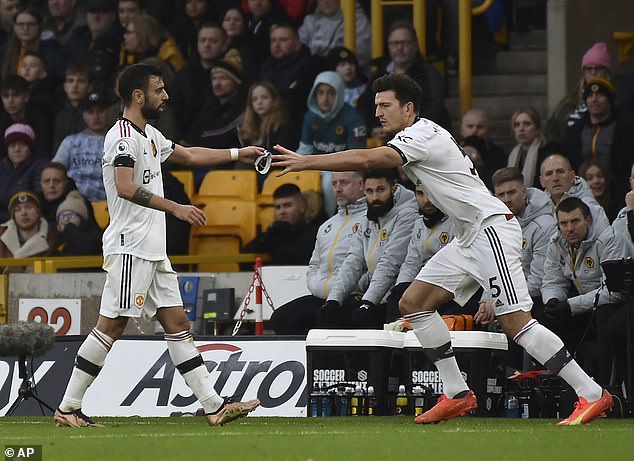 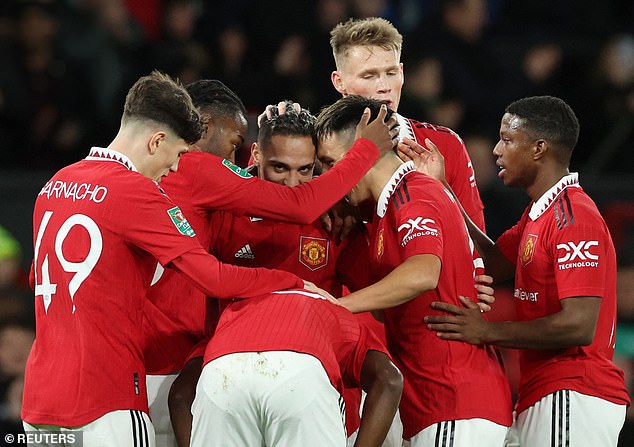 United are flourishing under Ten Hag at the moment, winning 11 of their last 12 matches 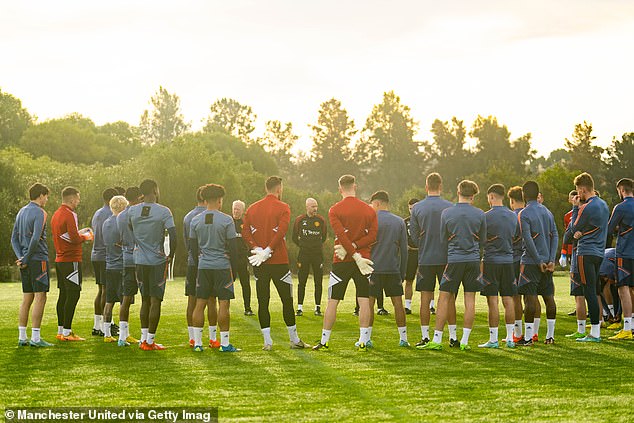 ‘Hopefully, I can offer that at times to certain individuals, and I’d expect them to offer it to me as well.’

On the leadership group, Heaton added: ‘That was one of the things he started with five or six players. Harry (Maguire) as captain, Bruno (Fernandes) as vice-captain, some of the senior lads involved in it.

‘That was more when he (Ten Hag) was setting his stall out at the start. He has been clear in his messaging and what he wants. He is very, very direct, which is brilliant for players. You know where you stand and what your responsibilities are.

‘I also think off the back of that we’ve been a little bit more successful so far, nobody is getting carried away, one game at a time, but when results are improving and everything is moving forward a little bit more, everyone is on the bandwagon and pushing for that and wanting that. So that’s been a key feature, his strength in what’s acceptable and what’s not acceptable and carrying that through.’

Heaton made his full debut for United in Tuesday’s Carabao Cup quarter-final win over Charlton at Old Trafford almost 20 years after he played for the club’s reserve team and FA Youth Cup winning side. It was also the former Burnley and Aston Villa man’s first start since returning to club 18 months ago. 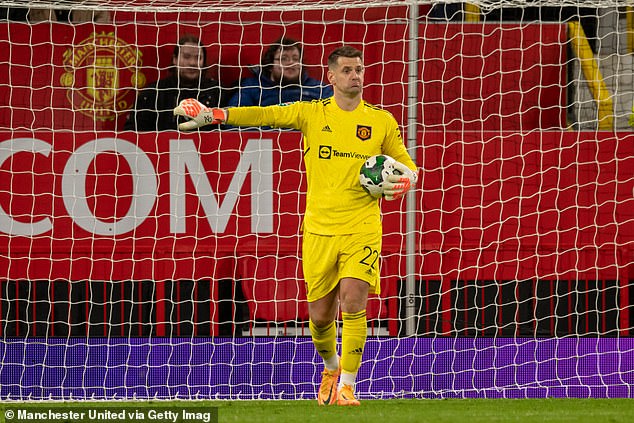 After keeping a clean sheet against the League One side, Heaton admitted that it’s been difficult waiting for his chance behind David de Gea and on-loan signing Martin Dubravka who has now returned to Newcastle.

‘I have to say that it has been frustrating not playing. I was ready all the time. I knew that opportunities would be limited, so when you get an opportunity like tonight you try and take it. I thoroughly enjoyed it.

‘I felt solid. It has been a while since I played and it takes a few minutes to get back into your stride, but I’ve felt ready all along. I felt good in the pre-season friendlies and mid-season friendlies that we played. We’ve had a few games at the training ground where the manager has put me in and I felt good in those. I know you haven’t seen too much of me but I have felt at it and I enjoyed it tonight.

‘For me, the priority is always the playing, it doesn’t go away. It can be hard at times. At the end of the day I’m always a big believer in the team and supporting David, who has been playing most of the time, and giving him everything in support. 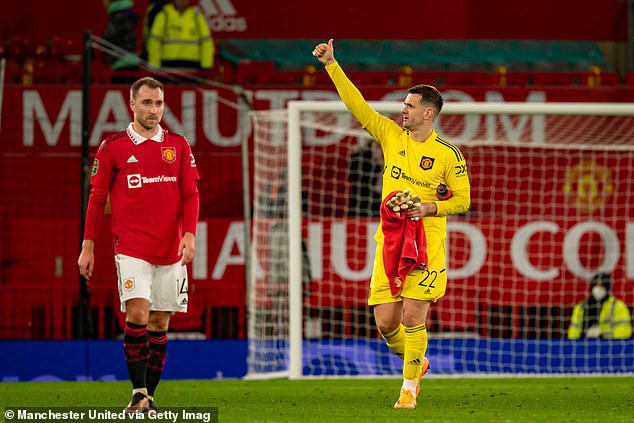 ‘But it still comes back to the personal side of wanting to play and that drive to do that. I’m also a realist, I knew the situation coming in. I’m not saying I’ll be banging on his (Ten Hag’s) door every week to get in the team, but you still want the opportunities to play.

‘We’ve had plenty of conversations. The manager talks to everyone. I saw opportunities and was slightly frustrated not to play in the earlier rounds. I had a bad time with injury in fairness so I was actually out for the first game and was coming back for the second when Martin came in and did well.

‘It’s unfortunate when things don’t fall your way but I’m champing at the bit to play games and get opportunities. They’ve been limited so far in my 18 months back at the club, but I’ve never taken my eyes off the ball and when I had the opportunity tonight I really enjoyed it.’ 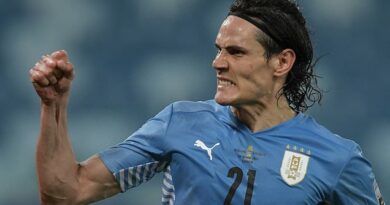