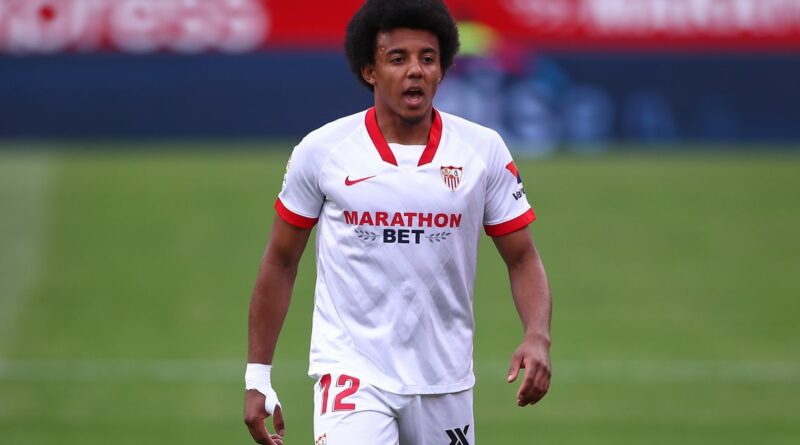 Jules Kounde has left the door open to a potential exit from Sevilla after responding to recent rumours linking him with the likes of Manchester United and Arsenal.

The 22-year-old enjoyed another fruitful season in Seville to earn attention from some of the Premier League’s superpowers ahead of the new campaign.

This summer could prove particularly busy for elite French centre-backs after Liverpoolconfirmed the signing of Ibrahima Konate from RB Leipzig, who will also sell Dayot Upamecano to Bayern Munich.

Kounde—who has been called up to the France squad for the first time ahead of Euro 2020—was asked about a possible transfer and told reporters: “I may have to change clubs this summer. I have not decided anything. My goal is, one day, to evolve into a great club to always try to progress, win trophies.

“To be able to start the season each year by telling yourself that the goal is win a particular trophy. I might have to move, but that's not relevant today.”

This marks the first time in more than a decade that the six-time Europa League winners have finished among Spain’s top four in consecutive campaigns.

Kounde is contracted at Sevilla until the summer of 2024, but his growing reputation could attract a big enough bid to convince the club to sell before then.

He made 49 appearances this term across all competitions for Sevilla, who conceded just 33 times in La Liga—only champions Atletico Madrid (25) and runners-up Real Madrid (28) conceded fewer.

Manchester United recently lost the Europa League final on penalties against Villarreal, where the absence of injured captain Harry Maguire appeared to make the world of difference.

The Red Devils will still be back in the Champions League next term after clinching a runner-up finish behind Manchester City in the Premier League.

Ole Gunnar Solskjaer’s side may well appeal as a destination more so than Arsenal, with the Gunners set to go without any form of European football in 2021/22.

Mikel Arteta could dip into the market to replace the outbound David Luiz this summer, although William Saliba is an option to fill that role after he returns from loan at Saint-Etienne.

Kounde appears unlikely to ditch Sevilla for the Emirates Stadium ahead of a new Champions League quest in Andalusia, with the title prospects in north London looking their lowest in years.

The French prospect would already demand a high price given his talent at 22, although a good showing at Euro 2020 could drive his valuation even higher this summer.