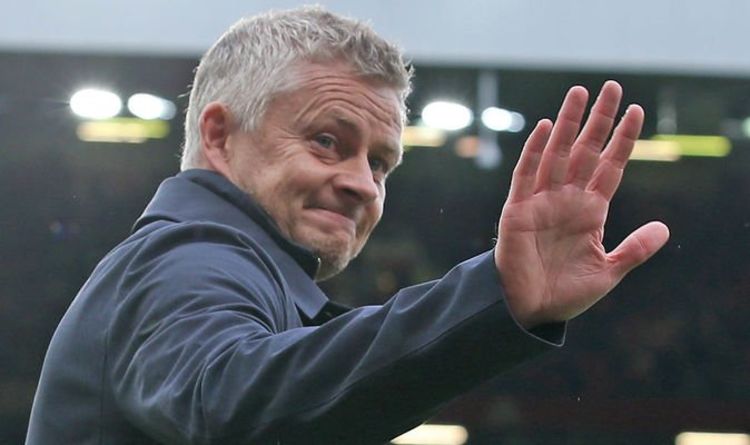 Manchester United boss Ole Gunnar Solskjaer’s decision to drop Cristiano Ronaldo against Everton was a ‘sackable offence’, according to a former Premier League star. The Portugal international saved the day against Villarreal in midweek. But he was named amongst the substitutes on Saturday, with Edinson Cavani picked in his place.

The footballing world was shocked when United decided to leave Ronaldo on the bench for the visit of Everton on Saturday.

And, by the end of the match, it was a decision that ultimately backfired.

United left Ronaldo out, choosing to pick Cavani, because Wednesday night’s drama against Villarreal had taken a toll.

That’s what Solskjaer said at the time, with the 48-year-old explaining his decision before the match by saying: “Well Wednesday night was a big effort, a big emotional and physical output.

“So we needed to freshen it up.

“When it’s an early kick off the start of this game is going to be important and we’ve got some very good players coming on as well.

“It’s a team we think is going to take charge of the game.”

And talkSPORT pundit Gabriel Agbonlahor, who previously played in the Premier League with Aston Villa, feels Solskjaer benching the 36-year-old was a ‘sackable offence’.

“It was a sackable offence not to start Ronaldo from Solskjaer,” he said.

“You look at Manchester United, you are playing Everton.

“Everton have been in good form this season. You need your strongest team to go out there and beat Everton.

“Send Ronaldo to Portugal shattered, that’s not your problem. Play your best team against teams like Everton.

“Ole got it totally wrong. Even the last 30 seconds of the game, he’s laughing and joking on the touchline when Benitez is so on it, talking to his players.

Agbonlahor also feels United won’t win the league while Solskjaer is in charge, believing he’s not up to the task.

“What does he cover in games? Do you see him sprinting after defenders, chasing people down? Against Villarreal he didn’t,” he continued, talking about Ronaldo.

“He’s waiting around, linking up play, getting into the box and he’s not sprinting around like a centre midfielder would.

“Pogba not playing then maybe fair enough, but Ronaldo you have to play him. Play him for 60 minutes and if you are winning the game then take him off.

“You just put yourself under pressure by not starting him. He has to start.

“Was that reaction from Ronaldo walking off the pitch after the game, not shaking anyone’s hand, not even acknowledging Townsend when he walked off, that was someone who was annoyed he wasn’t started.

United now sit third in the Premier League table, with Chelsea and Liverpool ahead of them.