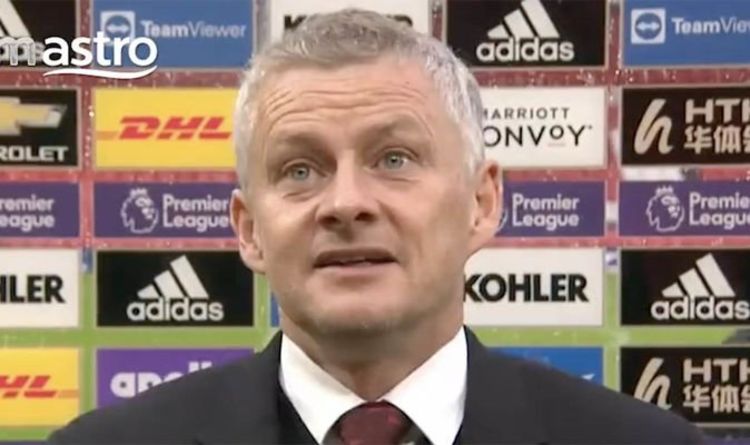 Manchester United boss Ole Gunnar Solskjaer appeared to be unhappy at Harry Maguire after his side’s 2-0 defeat to Manchester City on Saturday. Eric Bailly’s own goal and Bernardo Silva’s strike gave Pep Guardiola’s team all three points. And the result at Old Trafford has now plunged Solskjaer’s future back into doubt.

City were too good for United on Saturday and ran out deserved winners at Old Trafford.

For Guardiola, it was a joyous day. His side were superior in every department and, because of Bailly and Silva, now carry the bragging rights only a derby win can provide.

But, for Solskjaer, it was yet another bad day at the office.

United looked abject from the start and had just one shot on target, with Ederson saving from a pinpoint Cristiano Ronaldo volley.

The result means that, should Chelsea beat Burnley in their own Premier League showdown today, United could find themselves sitting 11 points adrift at the top of the table.

And, to make matters worse, Solskjaer appeared unhappy when being told about comments made by Maguire.

After the game, when speaking to Stadium Astro, Solskjaer was asked how it felt knowing some of his players had said they lack belief.

“Have they said they lack belief?” Solskjaer said in response.

However, the reporter then revealed that Maguire had indeed said something along those lines to them. And, upon being told this, the Norweigan looked to the heavens with an exasperated expression on his face.

Fortunately for Maguire, Solskjaer stopped short of criticising him – instead facing up to the fact United weren’t good enough on the day.

“That’s our job now,my job, to work on and make sure we go into the next game with the right mentality, a winning mentality.

In a separate interview, Solskjaer conceded United weren’t good in their defeat.

“Very difficult to talk about because we started off badly, passive and when they got the first goal it was always going to be difficult,” he said.

“David kept us in the game and they scored a goal they always score. They played well and they don’t give you opportunities so some praise has to go to them but we were not at our level.

“I think the whole place went a little bit, of course you get disappointed but we still don’t trust ourselves with the ball.

“They made it hard for us but sometimes we chose the wrong solution, sometimes the right solution but not the right execution.

“You want to make it a derby game with tackles and 1-0 going into half time you think you have a chance but the second goal was worse than the 1000 passes.

“At the moment we are (far off top teams) we need to get back to where we were at the end of last season.

“We’ve been through this a few times and since the last home game it’s been a very difficult period. Systems or style we need to be on the front foot more. I can’t look at myself and say this is how I want United to be.”

“The City Blues, we know how important it is,” he said.

“Here at Old Trafford always a good performance in general since we are together, We have won many times, much more than at any other stadium. Solid performance, good game and deserved victory. Three more points.

“You have to put the ball in the fridge. A lot of passes, a lot of passes. Except 10 minutes in the middle when I thought we lose stupid ball, really good.

“The move is the ball, everyone has to be in their position. When you move much, not good. The ball comes where we are.”

And, on if his side should have scored more, the Spaniard added: “It is OK. I am so demanding, we are so demanding for ourselves but I am very pleased. This is the game we needed.

“They [Manchester United] are so dangerous. That is why we had a game with a lot of control. If you let them run at Old Trafford it is a little bit like Anfield. They are built for that.

“We played the game we needed today. You have to play quick, to move the ball and do the touches every player need but also try to put the ball in the pocket.”