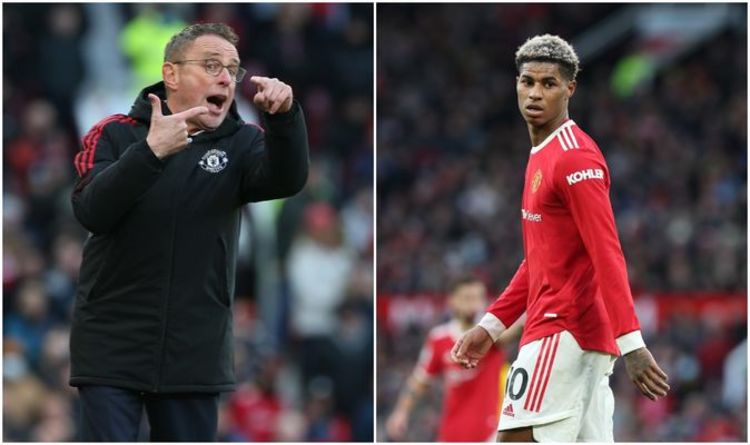 Manchester United interim head coach Ralf Rangnick appeared to agree with a belief held by Thomas Tuchel about Red Devils star Marcus Rashford during his first game in charge. The German, who will be in his role until the end of the season, kicked off his reign with a 1-0 victory over Crystal Palace.

United were dominant for most of the game at Old Trafford but had to rely on a late Fred stunner to get Rangnick off to a winning start.

The Brazilian sensationally curled home from the edge of the area.

There was plenty of anticipation ahead of the announcement of Rangnick’s first line-up.

The former RB Leipzig tactician prefers an energetic, high-pressing style that focuses on dominating spaces high up the pitch.

JUST IN: Liverpool warned what will cost them the Premier League title

Some fans and pundits had even suggested that Cristiano Ronaldo might struggle to find a place in the team.

The iconic forward has received criticism for his inability to press the opposition, although his 12 goals have at times outweighed that flaw in his displays.

Ronaldo was actually a doubt ahead of the clash having injured his knee while celebrating the second of his brace in last week’s 3-2 victory over Arsenal. He was substituted late on in the game at Old Trafford.

However, the 36-year-old was included in Rangnick’s first 11, but it was not the most interesting tactic.

The 63-year-old had United lined up in a 4-2-2-2 formation, with Ronaldo alongside Rashford in attack. It is a shape that Rangnick often used at Leipzig.

And it is evidence that Rangnick agrees with a belief reportedly held privately by Chelsea boss Thomas Tuchel.

Tuchel has questioned why United rarely use Rashford in the centre of their attack and has gone into great detail about how the 24-year-old is perfect for the role, according to the Independent’s Reading The Game newsletter.

The forward was predominantly used on the left under previous United bosses Ole Gunnar Solskjaer and Jose Mourinho.

He has also played wide on the right, with very few appearances as the focal point.

Rangnick had just one training session to get across his ideas ahead of hosting Palace at Old Trafford.

Neither side created many chances, although Palace forward Jordan Ayew missed from close range just before Fred’s fantastic strike.

United’s victory kept them sixth in the Premier League table and ensured Rangnick made a winning start.