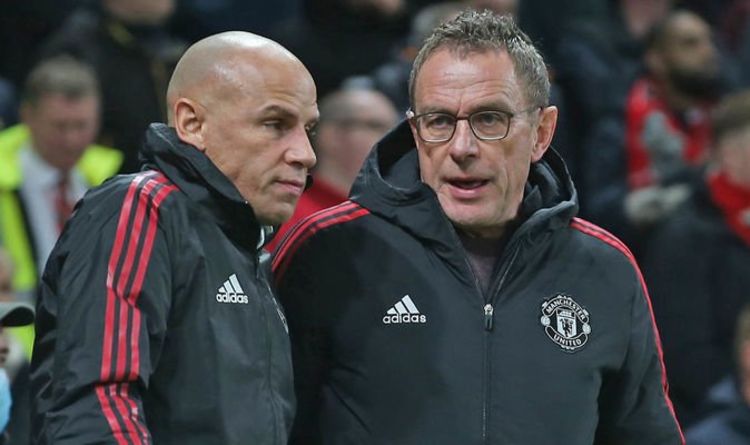 Manchester United boss Ralf Rangnick has made another appointment, according to reports. The German was brought in following the sacking of Ole Gunnar Solskjaer at the end of November. Not content with bringing Chris Armas and Sascha Lense, he’s eager to turn results at Old Trafford around.

United pondered chasing Mauricio Pochettino but, in the end, opted to bring in Rangnick instead.

While the club have shown some signs of improvement, however, results and performances have still failed to live up to expectations.

This is the biggest job of Rangnick’s career, with the 63-year-old previously doing well at RB Leipzig, Hoffenheim and Schalke in the past.

Armas and Lense have already been brought in as the German looks to get United back to where they used to be.

And the Daily Mail say Rangnick has now recruited journalist and broadcaster Raphael Honigstein as a personal media adviser until the end of the season.

That’s when Rangnick will move upstairs and become a consultant to the United board.

Honigstein has taken a six-month sabbatical from The Athletic to provide ‘advice and briefing notes’ to Rangnick.

He will continue to do broadcast work for Sky Germany, but won’t be involved when it comes to United games.

Rangnick supposedly made the decision due to the volume of media interest in his appointment and the fact he negotiated his move to United without an agent.

It’s yet another sign of the 63-year-old looking to make his mark.

He’s already changed the role of Eric Ramsey, the club’s first-ever set-piece coach who was hired back in the summer.

Under Solskjaer, the 29-year-old was often given regular time to work with the squad.

That would normally entail him coaching them 30 minutes after specific sessions, while he was also given the authority to take charge of certain drills.

Ramsay’s opportunities to work on set pieces have ‘become reduced’ since, however, though he has taken on extra responsibilities following the departures of the likes of Michael Carrick, Martyn Pert and McKenna.

He now helps warm defenders up before matches, which was one of McKenna’s roles prior to his departure.

Meanwhile, speaking earlier in the campaign, Rangnick opened up on the appointments of Armas and Lens.

“I wouldn’t say I was surprised [that United didn’t have a sports psychologist],” he said.

“I know from Germany there are quite a few clubs who do not work with a sports psychologist. But, for me, it is absolutely logical.

“Every club has different experts for goalkeeping, for physical performance, for different areas of the field – defence, midfield, offence.

“The team of experts at some teams is probably bigger than the number of players in a squad.

“If you then consider the brain, the head, the way players, staff members or coaches think is the most relevant one, then for me it is only logical to have the best possible expert from that area in your staff.

“This is what it’s all about, to help the players think the right things and not think the wrong things.

“To develop players, the brain should help the body perform at the highest possible level.

“This is part of the jigsaw, of the puzzle. It’s important for any top club, and Manchester United is one of the biggest clubs in the world – have the best possible people, and they should at least have all those little pieces available.

“It shouldn’t be the case that in certain areas we don’t have anyone. I strongly believe that every club in the future should have someone in this department.

“Players at this level are under pressure to deliver and perform at the highest possible level. At times they might need help and might need somebody to speak to.

“That should not always only be the manager or head coach. It’s important for the players to know there is a neutral person, an expert, to whom they can address in situations where they might need a helping hand, or even somebody to just listen to them.

“In Germany, we had the case of Robert Enke, who committed suicide when he was still the German national team goalkeeper. If you look at this aspect of the game, it’s important to have somebody in your staff.

“Of course, it is not obligatory, we do not force players to speak to Sascha, but they know he’s there.

“He’s a smart and decent guy, and he’s top in his job, I know that because we worked together at Leipzig for three years. The players will find that out very soon, if they haven’t already.”

Leicester City helicopter crash: Owner Vichai Srivaddhanaprabha ‘among those on board’