Ole Gunnar Solskjaer claims “the game is gone” after the latest chapter of VAR controversy. It perhaps tells the story that the United boss still found the time to criticise the technology, despite arguably his side’s best away performance in the Premier League this season.

United ran out 3-1 winners against Tottenham and could now be within 8 points of leaders Manchester City should they win their game in hand.

While Solskjaer is unlikely to be dreaming of a late push for the title, the position represents the clear progress United have made under his leadership.

But still, the Norwegian was aggrieved with the use of VAR after United’s classy opener was ruled out due to Scott McTominay’s foul on Son Heung-min.

“The game has gone. Game has absolutely gone,” he told Sky Sports.

JUST IN: Harry Kane ‘ready to tell Tottenham’ he wants to leave with two reasons behind decision 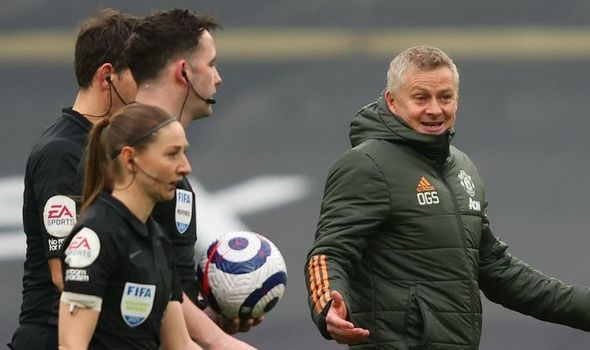 “If that’s a clear and obvious error, it’s an obvious error he had to look at it. It was a perfectly good goal.

“We shouldn’t be conned. I have to say, if my son stays down for three minutes and he needs his 10 mates to help him up, he won’t get any food.

“We weren’t conned, the referee was.

“That kick-started us. [Before the goal] we had played like a team who had played in Europe on a Thursday night [last time out].

“Top reaction, we played some great stuff second half. We felt the injustice and we showed good character to come back. We can’t let those decisions ruin this good season for us.”