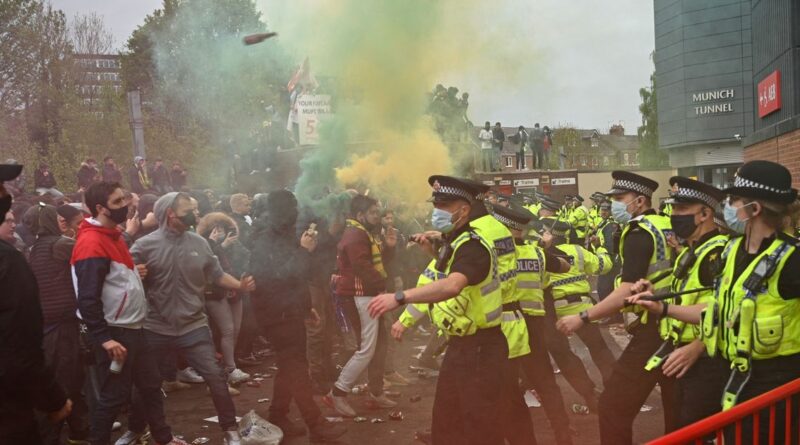 Manchester United could be deducted points as Premier League and FA rules contradict one another on postponements.

The Red Devils were set to take on Liverpool this Sunday at 4:30 PM but it was postponed after shocking scenes at Old Trafford.

Over 200 fans stormed the ground as more supporters demonstrated outside, with violence erupting in portions.

Most protested peacefully but there were incidents where police were attacked by crowds, especially near the Lowry hotel where the team was staying.

With no assurances over safety regarding driving the team bus to the stadium, for United or Liverpool, the decision was made to call the game off. "Following discussion between the Police, the Premier League, Trafford Council and the clubs, our match against Liverpool has been postponed due to safety and security considerations around the protest today," a statement from United said.

It means the two Premier League giants will have to face off on another date in the near future.

But could the club face sanctions after the match was forced to be stopped from proceeding?

The Premier League have launched an investigation into the incident and are querying how over 200 supporters got into the stadium.

United’s security measures have been brought under the microscope with fans breaking Covid regulations with ease, while policing levels outside the ground only ramped up after an hour.

According to the FA's rulebook in section 8.3.4, it states that United could be found to have been at fault for the match not going ahead and see Liverpool awarded three points.

It reads: "In the event of a match being abandoned due to the conduct of one Club or its members or supporters the Board has the power to order that the match is not replayed and to award either one or three points to the Club not at fault.

"It cannot levy a financial penalty due to the conduct of a Club."

However, due to the fact that the police were among those to decide that the game could not commence, the Premier League would state that the decision was not up to United.

Section L.12 states: "A League Match shall not be postponed or abandoned except: (L.12.1.) when on the date fixed for it to be played either the Home Club or the Visiting Club is competing in a competition permitted by Rules L.9.1, L.9.2, and L.9.3; (L.12.2.) with the approval of or on the instructions of the officiating referee; (L.12.3.) by order of the police; (L.12.4.) by order of any other authority exercising its statutory powers to that effect; or (L.12.5.) on the instructions of or with the prior written consent of the Board."

With both clubs agreeing to the decision to postpone the match, it remains to be seen whether any sanctions will come into effect.